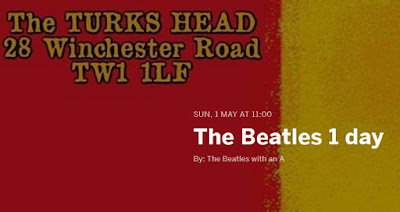 The 3rd annual Beatles Day - one day of all things Beatles!

An all-day event happening at the historic The Turks Head Pub in Twickenham, the location of Ringo's solo scenes in Hard Days Night.

Keep an eye on the Facebook page to get live updates.

Posted by Michele Copp at 00:06 No comments:


Rex Argent says design is a, “lifelong passion” as he picks up first prize in Redesignyl competition

Seventy-eight year old retired Art Director Rex Argent has scooped first prize in a competition to redesign one of 16 iconic album covers from the past 50 years.

The Suffolk-born veteran, Rex Argent, who now lives in Rainham, Essex and is 78, selected The Beatles, Abbey Road as his album of choice from the shortlist, wowing the judges with his youthful and vibrant interpretation.

The competition was run by Alamy, and stipulated that entrants could chose only three images from their stock image library to complete the challenge. The competition garnered interest from more than 500 people all keen to submit their designs and take the top spot which Mr Argent subsequently won.

The man behind the winning cover was born in 1937 and says;

“Entering the competition was a natural choice with my years of experience and background in the field. Art and design has always fascinated me. It is a lifelong passion”.

Following four years of study at the London School of Print and Graphic Art Rex landed a job at a local print studio and began his career. This was interrupted when he was called for National Service with the Royal Air Force where he took the role as teleprinter operator.

On returning to civilian life his career took off and the intervening years saw him work for a series of major ad agencies including the prestigious Saatchi & Saatchi.

“I have been so very fortunate to work in such a constantly changing industry and travel the globe. I have worked with and learned from some of the best artists, writers, film directors and photographers in the world.”

Although the competition was advertised online, Rex heard about it via an email sent to subscribers of the Alamy service. He decided to come out of retirement, put the golf aside for a week, and take his chances.

“The brief for Redesignal brought back memories of agency life. It was natural for me to research the library and find an image; One that said how much The Beatles were, and still are, loved by the public. As a massive John Lennon fan, as well as the music of that era, the image I chose simply summed it all up for me. With a little help from Photoshop I felt my re-design was good to go”.

So how does the granddaddy of design feel about advancing technology and the speed at which it moves?

“I do try to keep up and I have seen so much change in my lifetime obviously - but it gets harder every day. Technology seems to leap forward faster and faster. I still learn every day – from all angles, even YouTube! I find it the fun part that is full of exciting surprises for the artist in me! And after all – they do say, Knowledge is Power and I hope to harness that power for a while yet!”

Second prize went to Ralph Tittley for Unknown Pleasures by Joy Division and third to Adrian Robinson for Doolittle by Pixies.