Have you had a close encounter with one of the Fab Four? This page is where we will share photos, stories or other memories of our member's special experiences with all things Beatles.

To submit your contribution, email them to to us at Website@britishbeatlesfanclub.co.uk  and include a blurb to explain the encounter.  We can't promise to post everything but we will do our best.  We all have day jobs (we are volunteers) so be patient after you submit.  We'll let you know when it is up.

Gilles from Canada shared this story with us. "I am just a Canadian who’s father worked as a nuclear engineer building a reactor in Pakistan. All the Canadians and Japanese who worked at the nuclear plant lived in a colony out in the desert. At night I would sneak out and climbed on top of the water tower (there were stairs inside) where there was a view point. There was a copper lighting rod which extended even higher where I would connect my am radio. As we know am skywave signals reach far distances at night bouncing off the ionosphere. At times I could faintly hear BBC. One night I heard “hey Jude” which just came out. My school mates were wondering when travelling to school in a volt wagon van where I heard of this and I of course refused to tell. Oh my, those good old days where we had to be resourceful. Cheers Gilles".  The photo below is of the water tower mentioned in his story. 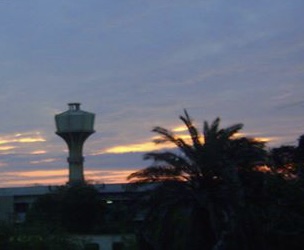 Paul Turner couldn't believe his luck when he not only stumbled upon Paul McCartney outside of Abbey Road Studios but Paul agreed to a selfie with him. This was before selfie was even a word! 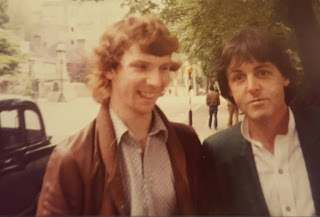 Ernie Sutton, treasurer of this fan club, also had a spot of luck when he was one of the couple of hundred Club Sandwich fan club members who were invited to participate in the filming of the 'Take it Away' music video in the 80's. An entire day in a room with Paul and Linda McCartney and Ringo too!

This next entry was written by Tricia, one of the original Beatles Fan Club secretaries. She tells the story of her encounter with a jacket that had belonged to George.

Lots of the people who now visited me either knew George personally or were Beatles hangers- on. Well, there was one guy who used to pop around to my flat from time to time. He used to turn up for a chat and then listened to some music for a while before leaving again.

Then one day he turned up carrying with him a hippy style jacket which he said I could have. It was perfectly normal in those days for people to pass on a few items of clothing like this to each other and so I just accepted it.

I wore it a few times but noticed that it was much too big for me. It also seemed to be rather dirty, and I knew that this Indian made jacket would fall to bits if it was washed. It also had tassels that were frayed, and some that had completely come away. As a result I felt that it was not really something that I could wear and that it was not even of a good enough quality for me to be able to pass it on to anyone else, and so I binned it.

The next time this guy turned up he asked me why I was not wearing the jacket. I told him that it was not fit for purpose and that I binned it. He then went out of his mind with distress.

He said to me “How could you have done that? It was something so special” I told him that it was a piece of rag, and I don’t know what he is making such a fuss about. I said that it was too big for me, that it was dirty and that even the tassels were torn away and missing.

He said that the missing tassels are what made it so special. It was unique. However, he never told me it had belonged to George. Everything had to remain “Magical Mystery”. People were just playing games with me.

Below is the picture of George in Esher wearing this jacket with the missing tassels and posing with his blue-point Siamese cat. 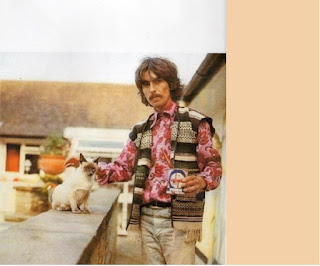