Curated Gallery
We have so many talented fans sending us samples of their work that we have decided we needed a page on our site to showcase all this amazing talent to give it a wider audience.

We don't promise to post everything that is sent to us but our curator will sift through the offerings and we will rotate the collection as it grows.

Carles Vilamitjana, from Barcelona, is an autodidact painter illustrator. He exhibits his works in the “Artelista Virtual Gallery“ website. The Beatles are just one of the topics he illustrates.  All of his works are always digital paintings. He likes this medium because it "gives me wide creative alternatives." Carles is currently working on The Beatles music and is trying to their lyrics into pure graphic illustrations.  He also painted a specific series about The Beatles during an imaginary visit to Barcelona.  We think his images are amazing! 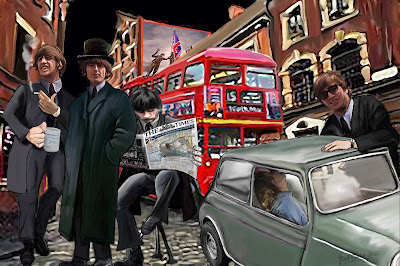 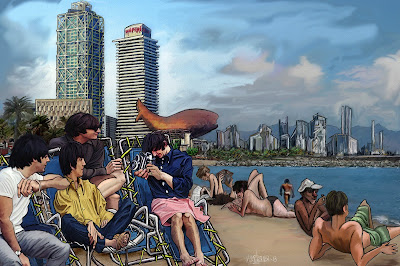 Nigel Abbey in Surrey currently has created about 35 artworks based on Beatles song lyrics. Some of of artworks are quite cryptic and take a while to get the song title - so he is experimenting with including the song title. We have posted two examples below.  You can see more on his website.  His images are protected by copyright but used with permission for this page. We are impressed with the artwork as well as the added puzzle to figure out which song each represents. 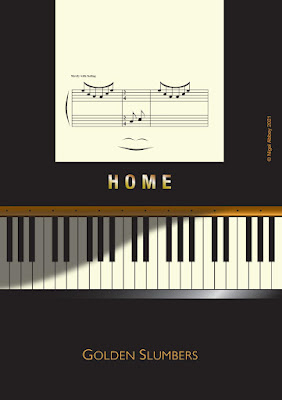 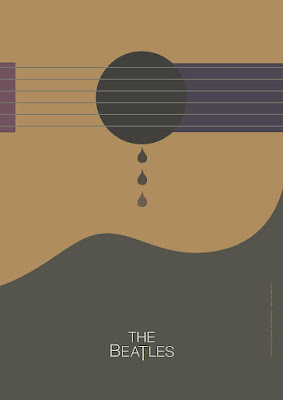 Pam Little has sent us these two photos of large acrylic paintings she did.  Her family and friends encouraged her to share them with us and our readers.  We are glad she did. 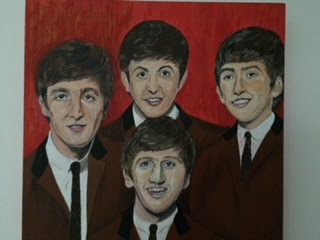 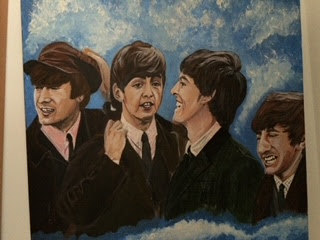 Tammy Jennette lives in East Tennessee in the city of Cleveland. She tells us:

"I have been trying to learn to draw for about a year now in my spare time. I feel it is an excellent way to unwind from my 9 to 5 property management job and a very enjoyable way to release stress.

I love writing poetry and drawing faces of the famous, infamous, and the unknown faces of society. Though I am not a professional by any means, I do enjoy the art of sketching and sharing my work with others.

I should, however, mention that this picture is one that I drew myself, but it is another version of a similar drawing I came across on "Dragoart" by an artist identified as "thetank69876"." 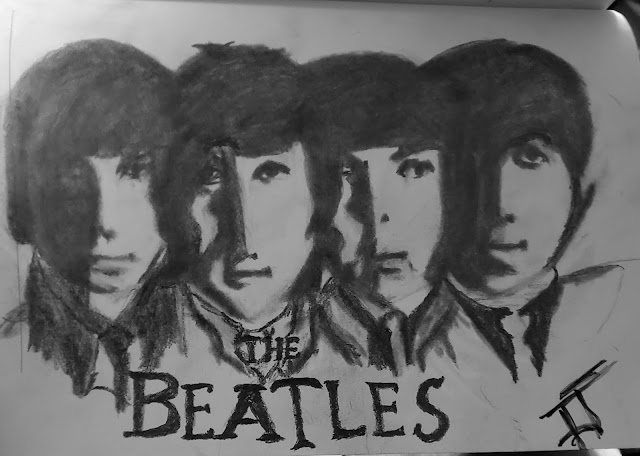 Julia from Russia sent us her drawing.  She tells us "I live in Russia. I'm a huge beatles fan and I love drawing The Beatles." 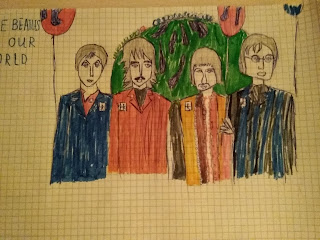 Gary Shaughnessy, originally from Manchester, is an art teacher in Denmark. A huge Beatles fan, he painted this for his son who asked him to do it. It is in oils on a 1m x 1m canvas. We are very impressed! 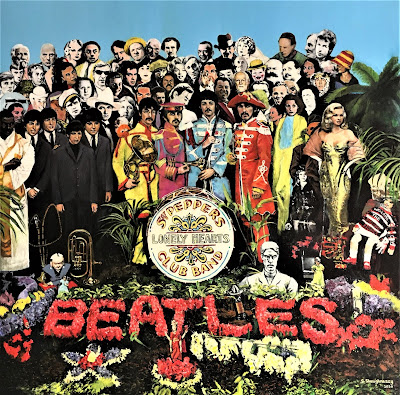 Will Hacon from Poole in Dorset sent this in to our treasurer. Unfortunately, it didn't arrive with any more details than that. However, we quite like it. Will, if you are reading this, please email us more about you and/or what inspired you. 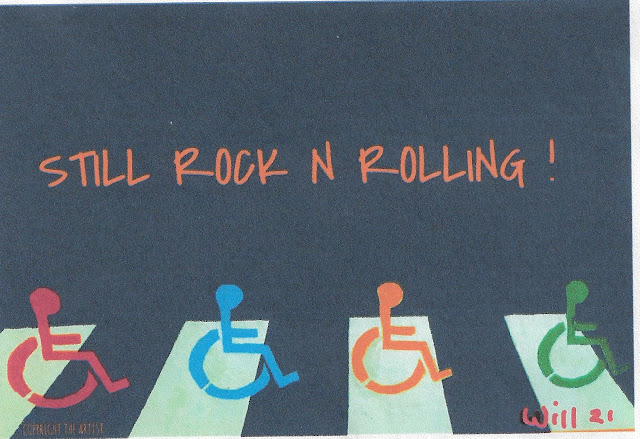 William Davies lives across the water from Liverpool and is just 7 years old yet already a brilliant artist and a huge Beatles fan. He drew this for his Beatles subject for school during homeschooling last month. He thinks John Lennon  fantastic! He also made a fact file all about John Lennon as well. We love that he is so keen and just 7 and who knows, he may be a famous artist himself when he grows up! 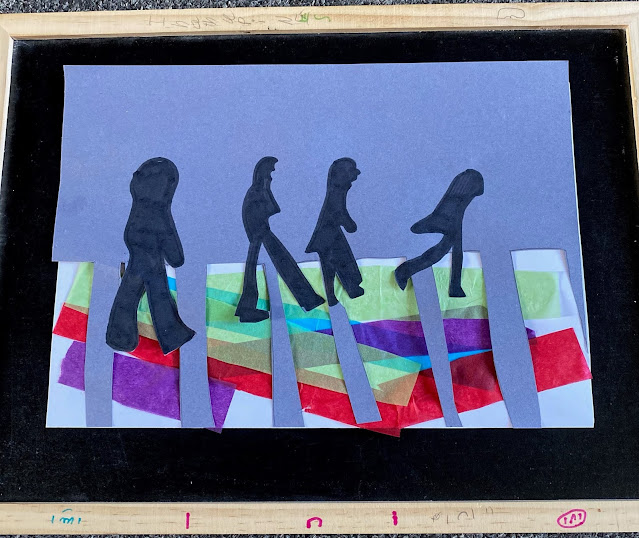 Rolf Møller from Norway is a doctor who also sings. He tells us "I work as a medical doctor, but music is more fun! I have some paintings of fab four on my office wall! I think 'Yes it is'is an understated song, maybe because they hurry to finish in the studio?...and George is a little out of tune! Here is my brand new version." We think it's fab! 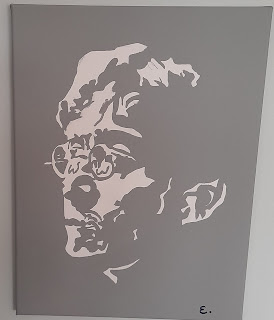 Sean Graham grew up in Aldershot where the Beatles once place to a crowd less than 20 people! He and Jim Birmingham recently wrote this song based on a real encounter he had with an older woman friend of his mum whose surname coincidentally was Rigby like Eleanore Rigby and who lived in Liverpool as a child.  Below is the original song by Sean Graham and Jim Birmingham submitted to the John Lennon Songwriting Contest in 2020.

Julia Gutierrez was named after 'Julia' the song and she tells us, "I’ve listened to the Beatles my whole life and only started getting into them about two or three years ago and in this piece of art it’s where all four Beatles in different phases and clothing i hope you like the art! ." 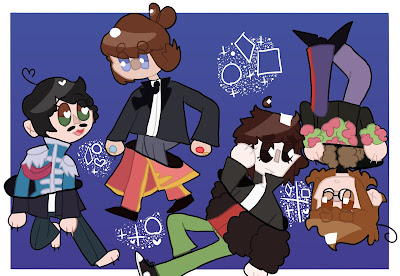 William Pagel, from Richfield, Minnesota in the USA, was inspired to make this cover video because "it has always seemed like one of John’s most unusual and interesting tracks since 'Strawberry Fields' and 'Tomorrow Never Knows'. I felt that I could do it in my own particular way by using my amplified 1968 Harmony acoustic guitar....I play it all the time."

William Pagel did this pencil drawing in 1983 that became the cover of the local Minneapolis Beatles Fan Club paper called “The Write Thing”. He says it took quite a while for intricate work.﻿ The piece was done with pencil in 1983. 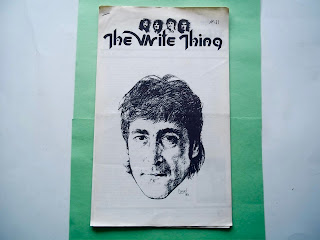 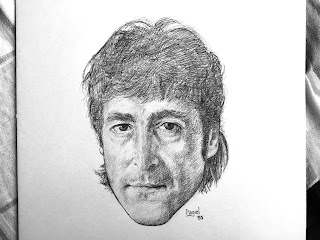 Robotic Ewe (aka Joe McGill) from Glasgow submitted these images. It is a typographic recreation of the Abbey Road album cover, created from the lyrics of their albums. 35,252 words in Cooper font make the image. With a bit of Pepper suits colour added to the road 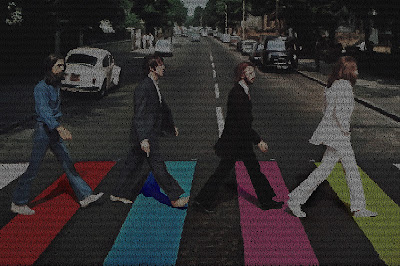 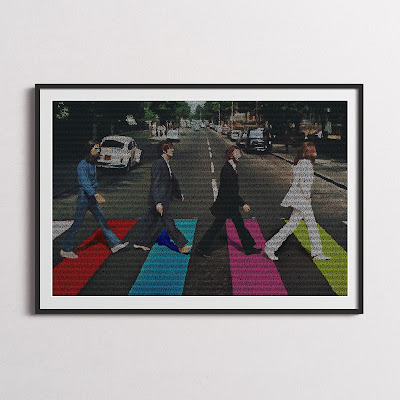 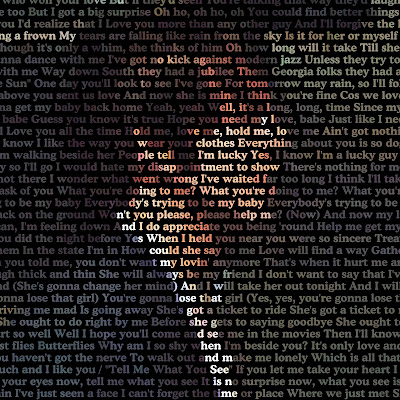 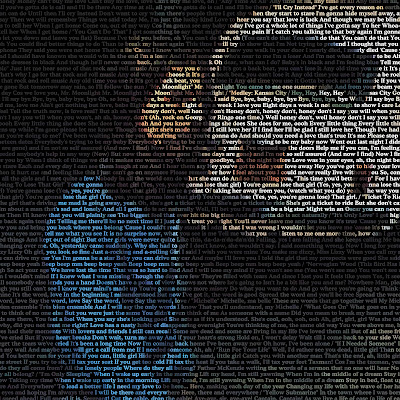 Elizabeth McGrath from Nottingham has only been drawing for a year, but her submissions are excellent. She got inspired after watching a documentary on the Beatles, "I started listening to their music and enjoyed listening to it. I decided that I wanted to try and draw portraits of them, so I did a portrait of John Lennon." 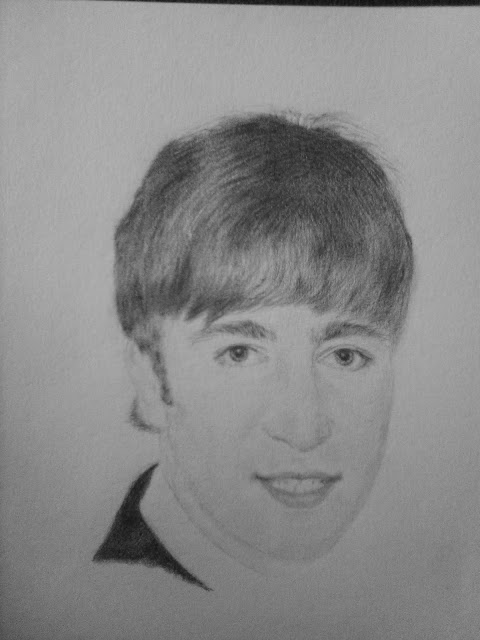 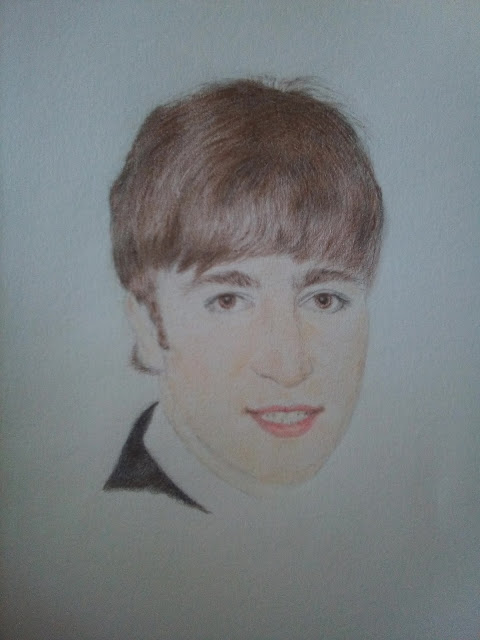 Harald Winter has shared his "It's been a hard day's night" drawn with crayon on handmade paper (53 cm/ 75 cm). 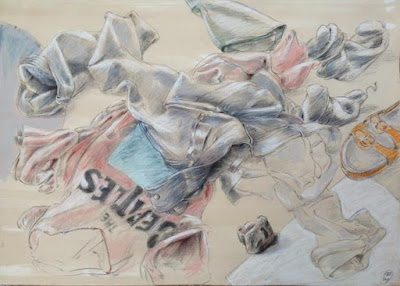 Ingrid Black of Canada sent us 3 of her paintings.  You can see more of her work on her website. 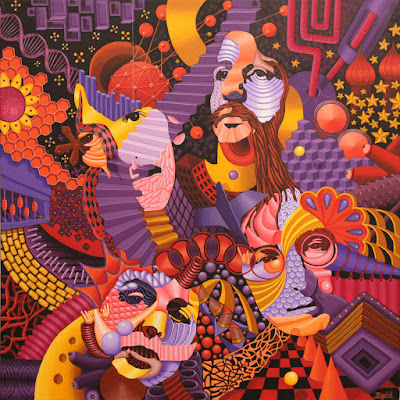 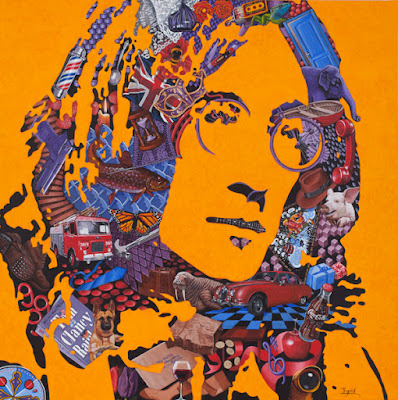 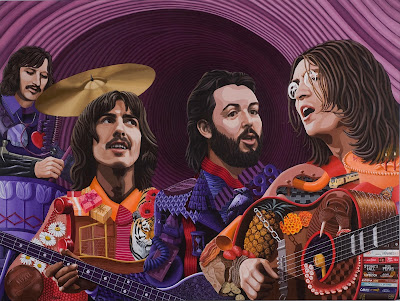 Ginger Sedlarova wrote "I'm a Canadian Beatlemaniac and happy member of your club. Although my life's main focus is The Beatles, I'm also an artist and jewelry designer. I've attached an image of a painting I did for a friend and fellow Beatlemaniac for a Christmas present. As she's now opened her gift, it's safe to make it available for public viewing! Here's hoping you and your members like it as much as she did. Many thanks from a loyal fan... Ginger Sedlarova, Canada" 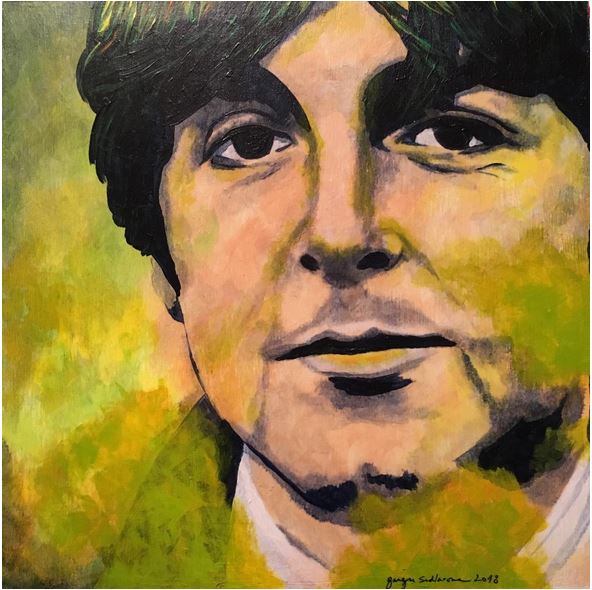 Digital Art work completed by 16 year old Kaitlyn Buter. Huge fan since she was 3. Her dream is to travel to England and visit the same places as the band. 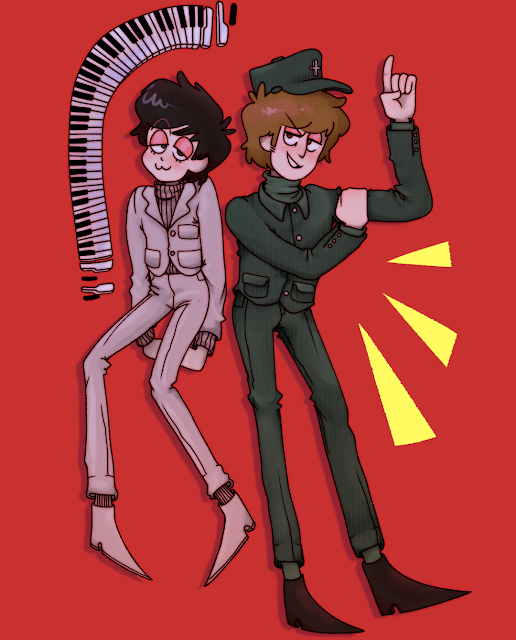 Member Borja Ortega has contributed these awesome pieces.  He wrote that these are "drawings/paintings and collages (related to the last Paul and Ringo concerts in Madrid, and my visit to Liverpool). It would be a pleasure to be able to collaborate with a little help from my friends.... "


Member Alan Millen has contributed this creative video. Below he describes how he created it. Enjoy!


"Using wooden figures that can be manipulated into any position, I took 100 photos and ran them at three-tenths of a second per picture in my Pinnacle movie making software to create some rudimentary dance animation. I then found a short public domain clip of The Beatles playing live on some ancient TV show. The third main element is a couple of seconds from a public domain video of unidentified participants and location. I found at labelled as "1965 Teen Birthday Party". The material is described as "found video".  I downloaded it and used a few seconds of content for the "she looked at me" line and then took a screen grab of the girl's face which I then subjected to a serious of artsy photo effects. So I don't know who the "mystery girl" is. She'll be in her late sixties now, I reckon. All these years later she gets to "star" in my video. Famous for 15 seconds rather than the proverbial 15 minutes Andy Warhol talked of. "


I saw her standing there from Alan Millen on Vimeo.

My name is César San Juan and my favourite hobby is performing the Beatles with my guitar or my ukulele. You can see in this link my cover of "Oh Darling" with ukelele and now my personal cover of one of the best song of Macca after the Beatles "Somebody who cares".


Ghislain Bonneau from Victoria, BC Canada.  He tells us "At the age of 21, I decided to take an Art course with the FAMOUS ARTIST SCHOOL in Connecticut USA and that helped me a lot with the part of composition in visual art. I was not very productive in my paintings since it was only a hobby and it was mostly landscape, but recently I started to do portraits, and being a big fan of The Beatles they where for sure to be done, but before I could do them I needed some practice so I did Mother Theresa, then Nelson Mandela, then the Dalai Lama and then Jimi Hendrix, and then I felt ready to do the Beatles. I am now 68 and I did the Beatles Paintings just last year and where completed in October 2015
I don't mind sharing my art with others, specially when it comes to the Beatles and it is not to gain popularity or to make money from it, since there is absolutely nothing for sale on my site and I don't want to sell my paintings either, I just like to share what I do and what I know with others.

Cheers,  PEACE, AND BEATLES LOVE FOREVER"
(p.s. You can see more of Ghislain's art on his website)


The Beatles in Hamburg June 66


When The Beatles played two shows in Hamburg in June 1966 the local police department used the occasion to make a training film on policing events that drew a large crowd. I have edited and subtitled the original 30-minute film into a 7-minute report on the first performance of the day. Snippets of the Beatles performing I Wanna Be Your Man & Baby's In Black are include