* Not a member?  Go to the JOIN/RENEW tab to become one.

Being a lifelong beatles fan it seems like I have every book, every cd, every album, every magazine so buying presents for special birthdays has always been a challenge for my long suffering wife Annita. Tickets for macca and ringo, various tribute bands, trips to Liverpool, trips to New York have all come my way over the years.


This year however the beatles came to me. As a surprise she booked John Lennon in the guise of Phil from the Beatles4Ever tribute band. Phil turned up with a couple of speakers a guitar and a laptop and got my party rocking. No-one was in on the surprise so it was a treat for everyone not just me. Must say it was the best party ever.


As a special treat from Phil, I picked up the guitar and we did an acoustic rendition of Norwegian Wood.


If your looking for a great night with a special guest then contact Phil on Facebook searching for Beatles4ever. You will not be disappointed. I also saw he is doing the full band lineup at a charity night on June 7th for cancer trust in west london/Surrey with a group of local kids singing in choirs and playing all the brass and string parts. I've got my ticket already. Can't wait.


What can I say other than Annita you're the best!


At the end of the summer, the BBFC held a member-only competition with a lovely prize offered by The Strand Palace Hotel to celebrate the recently announced extension of the Beatles musical ‘Let it Be’ at The Savoy Theatre until January 2014.

BBFC member Mark Smith was the lucky winner of dinner at Daawat and two tickets to ‘Let It Be” and Mark used the prize to celebrate his birthday with his wife. He’s reported back about what a lovely time they had and sent us a couple of photos too. Here’s what Mark thought about his prize:

“Just to let you know me and my wife Laraine went for the meal and Let It Be show I won through the BBFC. We could not have had a greater time. It was my birthday on the 10th October. The meal at the hotel was fantastic. I am a total novice at Indian food, but it was great the girl or should I say woman who looked after us, Heather, was a darling, a credit to the hotel, funny and mad that's what she called us as well. Don't know what she meant ha ha! Then on to the show. I didn’t know you had arranged for me to get up and sing with the band. OK, I made that up ha ha. Thank you again it was fantastic and a 25th, I mean 52nd birthday to remember. Best wishes, Mark Smith”

R is one lucky fan.  He's a first generation fan who witnessed the Beatles filming HELP! in person in Austria back in 1965 and last month he came full circle when he took his son to see Paul McCartney perform in Vienna.  He kindly sent us this report about the concert.  Enjoy.

It was a night I always will remember: Paul McCartney at the Vienna Ernst Happel Stadion, June 27th. It was absolutely fantastic. All were here, elder ladies and gents in their Beatles T-shirts, and young girls and boys in their latest hippie style dresses.

There he was, Sir Paul McCartney, 71 years of age, -- plus four of the most gifted musicians in todays pop music business. Beside Paul there were not John, Paul and Ringo, but "Wix" Wickens, Rusty Anderson, Brian Ray and Abe Laboriel Jnr. - they are the best backing band for Paul anyone can imagine. All are masters on their instruments and are harmonizing on vocals in best way.

Paul made a performance of nearly three hours, played 39 songs, 26 were Beatles classics. He started with a Beatles song "Eight Days A Week", and there were such a lot of highlights, especially "Blackbird", where Paul was lifted up 8 metres, and "Here Today" for John, and "Something" for George, and also love songs for Linda and his present wife Nancy. It was a privilege to hear and see these fab songs. It will be a night I always will remember. Especially these songs from the Sgt. Pepper Album were more than excellent. When the Beatles finished touring in 1966 one of the reasons was that "now" it is impossible to bring these "difficult" songs live. But hear now this group with Paul McCartney as their head they could perform these songs live in album quality, naturally with the help of today’s technical possibilities.

Not only the musical performance was excellent but also the show and the visual effects were first class. With me was my son, 17 years of age, -- and I am 66, and he was as enthusiastic as me, - what other star or entertainer has such a great popularity over a period of 50 years! My son fell over my neck and kissed me and said: “Thank you daddy for this wonderful night with Paul McCartney. Now I can imagine why you always were a fan of Paul and the Beatles, they are the "Greatest." If Paul and his band will come to Austria or Germany again, me and my family will be there.

Best regards
Rudi Aigmüller
Marcus on the radio
Marcus Garside was interviewed recently by Radio Leeds for Beatles Love Me Do. You can listen to a recording of his 5 minute piece here. Very interesting and a real fan! Thanks for sharing Marcus.

Member Alan Millen Celebrates Beatles Week
Alan Millen from Switzerland is a true Beatles fan and he loves Beatles Week so much, he's set up a special YouTube page with videos he's made about the event.

Use the link below to checkout his page. There you will find:
Click here to check out Alan's Beatle Corner on YouTube
Members have fun at Beatles Week 2012
The British Beatles Fan club had a grand time at International Beatles week, and one of the really nice perks is getting to meet up with club members from all over the world and some famous faces too!
We are already excited about next year, so if you are there in 2013, stop by the BBFC table and say hello.


Fan Club Member Rick Linville's Book/Film Project
One of our BBFC members, Rick Linville, is working on a project with other fans from around the world and is inviting other members of our group to join in. This group of 146 (and growing) fans/members from all over the world who have joined together to possibly create a Meet The Beatlefans book, as well as a possible feature length film about Beatles fans and their true local stories simply as fans. Rick is not looking for the glamorous stories, although you can include them if you do have such stories. So how can you submit your stories? Rick states we all have a unique story, which possibly could be used in the book. Rick and the rest of the group would love for you to share your precious story as a Beatles fan, whether first or second or third generation, and wherever you live on Earth. You can learn more and even join this great site on The Beatles here: http://launch.groups.yahoo.com/group/BeatlefansDocumentary/ To submit a story without joining the site or just ask Rick more about the project email him.
Member Michele Copp Publishes Beatles Book 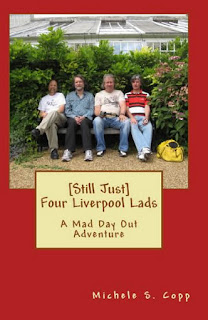 There's a new book out there just itching to be put on your wish list for the holidays. Michele Copp, club member and Yahoo Group Moderator for the BBFC, has written a Beatles book that was published just this week. Unlike most new Beatles books, this one is fiction and promises to be a fun read. You can learn more about the book, Michele, and the true life events that inspired the book, at the book's website or on Amazon. It is available on the UK Amazon in Kindle format.  Below is how the book is described on the back cover.

What if the Beatles had secretly reunited in the 70’s and recorded an album of their best work in complete secrecy, but hid the work away after another break up? And what if you discovered this information 40 years later? Follow the action and adventure in this fictional account of a group of Beatles fans who stumble upon a clue and set out to find this unreleased music.  Their hunt takes them from Scotland to the Isle of Wight and it appears that someone else is determined to get to the music before them. Beatles fans around the world will enjoy the exploits this group of die-hard fans experience in their efforts to follow clues left by Paul 40 years ago as they set out to prove that this music really existed.

p.s. Do any of those faces on the cover look familiar? They should as some of them are real members of the BBFC and friends of Michele.
Member Dan Richards starts Apple Core Beatles Tribute Band

There is a brand new tribute band out there in SW London started by our very own fan club member Dan Richards and his band mates Carl Gibbons, Andy Deevey, Chris Brown and Allen Hall.

The Apple Core Beatles Tribute band got together last July through their love for all things Beatles. Ranging in age from 30-50, these long time Beatles fans pride themselves on faithfully recreating the sounds of the sixties and putting on a great show playing the music they love. Even more amazing is the fact that Dan has only been playing guitar for 2 years! His love of the Beatles started at age eight thanks to his “wonderful dad who got me to watch A Hard Day's Night and made me listen to Beatles for sale.” That was all it took! He was hooked, but it wasn’t until 2009 that he took it to the next level and decided to learn the guitar!

After Dan and his wife traveled to New York to see Paul McCartney in concert (for the first time) at Citifield Stadium, he was so inspired, he decided to learn guitar himself. Back in the UK, he bought a Beatles guitar chord book and started to learn the songs. A mere two years later, this determined fan has a tribute band that has been performing for five months. All the band members are die hard fans who are making their dreams a reality with the formation of the Apple Core Beatles band. As Dan said, “We have all put in a lot of hard work just to get to this stage. We hope to have a successful 2012.” If you live in, or plan to visit, London anytime soon, check out the band’s website for their gig schedule. And better yet, if you want to hire them, check out their availability on Lemon Rock! They’d love to be involved in any fan club events happening in the London area. 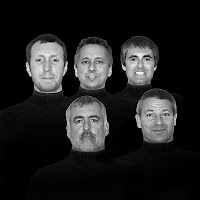 Band Lineup
Dan Richards - Rhythm Guitar,Vocals, Harmonica
Carl Gibbons- Guitar,Vocals,Harmonica
Andy Deevey - Lead Guitar,Vocals
Chris Brown - Bass,Vocals
Allen Hall - Drums,Vocals
Note: Dan and the band are on the look out for affordable Beatle suits. If you have any leads for them, please contact them through their website.


Instructions for submitting content
* Not a member?  Go to the JOIN/RENEW tab to become one.