Journalist J. Adolfo Iglesias from Almeria, Spain will be giving a special talk August 7th at the Liverpool Central Library.  You won't want to miss this.  Mr. Iglesias has travelled all the way to Liverpool just to share his research.  It is a fascinating story he has to tell so mark you calendars now! 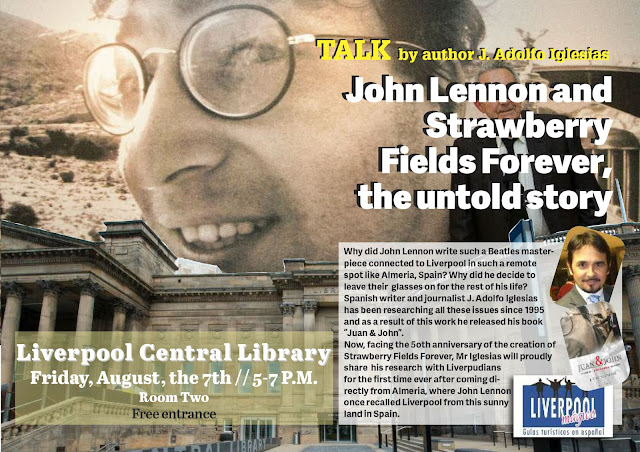 Posted by British Beatles Fan Club at 21:41 No comments:

Review: MOM, HOW DID YOU MEET the BEATLES? 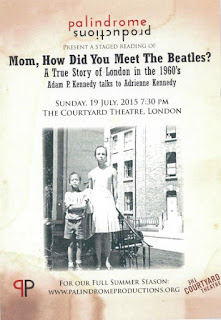 MOM, HOW DID YOU MEET the BEATLES?

Adrienne Kennedy is an African American playwright, famous for her often searing insights into racism in the United States. In the 1960s she was commissioned to write a new play and the subject she chose was to base it on John Lennon’s book ‘In His Own Write’.

In 2008 she wrote a memory play about her experiences in 60s London, meeting John Lennon, Victor Spinetti and Laurence Olivier. We were privileged to see a rare performance of Mom, How Did You Meet the Beatles? at the Courtyard Theatre in London, produced by Palindrome Productions as part of their Summer Season 2015 (www.palindromeproductions.org).

This one off performance starred Debbie Korley as Adrienne and Joseph Adelakun as Adrienne’s son, Adam.

Adrienne appears as she would have in the 1960s, while her son appears as a young adult, more fitting to the current day. In the play Adam asks his mother questions and Adrienne tells her son of the times she spent in London meeting The Beatles, and becoming involved in the play.

Adrienne originally came up with the idea of producing what would emerge as The Lennon Play based on his two books In His Own Write and A Spaniard in the Works. The play opened on 18 June 1968 at the Old Vic Theatre in London.

Adrienne and her husband Joe had separated in the early 1960s while living in New York. At the time of this split, she was reading John’s first book and came up with the idea to write a play based around it. She wrote to Tom Maschler, John Lennon’s publisher, and eventually was told to look him up when she visited London. Adrienne and her young son, Adam, travelled to London in November 1966.

She was determined to stay in London and successfully applied for a Guggenheim grant to finance her stay. She moved to Primrose Hill at the suggestion of her friend the African American actor James Earl Jones.

Adrienne then met Victor Spinetti who had appeared in two Beatles films and was a close friend of John Lennon’s. Victor took the idea to Lennon at his home in Weybridge. John liked the idea and soon Laurence Olivier, then Artistic Director of the National Theatre, was interested in the project and wanted to meet Adrienne.

Kenneth Tynan, a well-known theatre critic of the day, met with Victor and Adrienne and a single performance of the play was agreed for December. She then went to Piccadilly with Victor to meet John. On arrival, Paul answered the door and took Adam, her son, and placed him onto his lap. “Paul had a quality that filled the room”, Adrienne recalled.

Just as they went to leave, John appeared and was introduced to Adrienne. He looked pale and thin, nothing like how she imagined him. John promised to attend the first day of rehearsals, which he did. Also present was Laurence Olivier.

A lunch followed in a nearby pub with Ringo, John and George Martin in attendance. This proved too much for Adrienne, as she was just overwhelmed to be in their presence. At her next meeting with John, he told Adrienne he was going to India with the other Beatles and that Tynan and Victor Spinetti were going to write the play.

Travelling back in John’s car she recalls him saying “Maybe it will be running when I am 30”. John at the time was 27. Olivier took her to the December performance of ‘The Lennon Play’, red carpet treatment and all. John and Cynthia were there and Adrienne then got the first impressions she was about to be dumped.

Later Victor rang her and told her John was to be the author along with himself. She had only signed a piece of paper for the one performance and really didn’t have a leg to stand on. She slowly began to realize that her idea of creating a play around Lennon’s text was disappearing.

John did have the decency to call her, and offered to meet her and Victor at Apple on the following Monday. John met her saying he would straighten this mess out and rang Kenneth Tynan. “I want to keep Adrienne”, he told Tynan.

John went off to India before the play opened, and rehearsals had been taking place for 3 weeks before Adrienne was even aware that the piece was in production.

Mom, How Did You Meet the Beatles? is primarily a monologue interspersed with questions from Adam, and lasts just over one hour.

The play doesn’t delve into her feelings about how she was treated, particularly after being dumped, but just tells the story of her exciting times in London when she met The Beatles and her overwhelming awe of being with Laurence Olivier.

Well performed and worth a look, if this decides to tour. 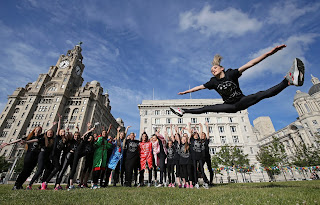 The award winning Beatles Story has teamed up with Jennifer Ellison’s dance school, Jelli Studios to support The Very Big Catwalk, held in association with Very.co.uk, during the city’s Transatlantic 175 weekend on Saturday 4th July.
Former Brookside actress Jennifer Ellison will be strutting her stuff on the catwalk this weekend with 25 dancers, aged between 10 and 21. They will all take to the stage to perform a number of Beatles classics including “Sgt Pepper’s Lonely Hearts Club Band” and “Get Back”. 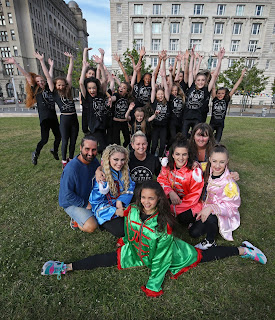 The event is part of the city’s wider Transatlantic 175 celebrations and will aim to break the world record for the “Most Models on a Catwalk” with the former soap star just one of the thousands that are set to take part - and the catwalk needs you to get involved.
Jennifer said: “We wanted to do something Beatles related so teaming up with the Beatles Story was a natural choice. It is going to be a colourful performance with the very best in Commercial dance on show.  We promise to put on an unforgettable show and make our city proud.
“Saturday will be all about Liverpool and what better way of showcasing its talent than through the thousands of locals that will take to the stage. There is now less than a week to go until the big event – and the catwalk still needs more people to get involved. Lots of different sections will be brought to life and it isn’t too late to take part– the catwalk needs you!”
Diane Glover, Marketing Manager at the Beatles Story, added: “We wanted to do something a bit different to mark the occasion, rather than simply walking down the catwalk, we have tried to combine the city’s love for both The Beatles’ music and dance.
“We are very excited to be partnering with Jelli Studios for this event and we are looking forward to seeing the final product on the day.”
The weekend is being organised by Liverpool City Council and curated by Wayne Hemingway MBE to mark the links between America and the UK.
Wayne said: “The Very Big Catwalk will be an exciting celebration of the diversity in Liverpool. You don’t have to be a model to get up there, we’ve got everyone from dancers and dads to brides and brownies representing Liverpool life on the runway. As we edge closer to the weekend, we are even more astounded by what an amazing community Liverpool is and we are looking forward to bringing these strands of the city together on The Very Big Catwalk.
“Even better, it isn’t too late to get involved in this historic moment for the city. Individuals and groups can still sign up – with this event it is very much the more the merrier!”
Jelli Studios features on Jennifer Ellison’s ‘Dance Mums’ TV show on Lifetime recognising rising stars in the dance industry across the UK. Two of its stars and British Championship winning dancers, Tayluer Amos and Eleiyah Navis, will also take to the stage at the event.
Key city landmarks will also be taking part in the event, with models and the public being hosted at Downing’s The Port of Liverpool Building, during the event.
Entries are still open to join The Very Big Catwalk. Sign up by visiting http://www.cultureliverpool.co.uk/one-magnificent-city/the-very-big-catwalk/individual-sign-up/
Posted by British Beatles Fan Club at 21:05 No comments: