“The melodies, textures and harmonies he coaxes out of an acoustic guitar are absolutely spellbinding." - Guitar Player Magazine

Described by the Los Angeles Times as "Uniformly exquisite and dazzingly executed”, this new album follows the “fantastic” (Fingerstyle Guitar Magazine) LJ Plays the Beatles (2000), voted one of Acoustic Guitar Magazine's all-time Top Ten albums, and LJ Plays the Beatles Vol. 2 (2010), “a keenly pleasurable journey through some of the best music ever created” (Acoustic Guitar).

Juber has a unique perspective to reimagine these classics. “I started playing guitar in November of ’63, coinciding with the first wave of Beatlemania,” he said. “Their songs are baked into my musical DNA and having played guitar with three of the four Beatles, they form a central thread in my own life experience.”

Called “a master” by The Who’s Pete Townshend and “one of the world’s most remarkable acoustic guitarists” by The South China Post, Juber is known for fusing folk, jazz, blues, pop and classical styles to create a multi-faceted performance that belies the use of only one instrument. He was first internationally recognized as lead guitarist in Beatle Paul McCartney's Wings, with whom he won a Grammy, and has since established himself as world-renowned guitar virtuoso and entertainer.

Known to his fans as ‘LJ’, Juber has released 25 solo albums. As a studio musician, he can be heard on recordings from artists as diverse as Dan Hicks & The Hot Licks, Seal and the French chanteuse Sylvie Vartin, plus he is featured on the soundtracks to hundreds of TV shows such as Home Improvement, and movies including the academy award-winning Dirty Dancing, Good Will Hunting, and Pocahontas.
Tracklist:

For more information:
http://www.laurencejuber.com/
Posted by British Beatles Fan Club at 01:33 No comments:

Email ThisBlogThis!Share to TwitterShare to FacebookShare to Pinterest
Labels: Music

Were You a Screaming Girl at a 60’s Beatles Concert? 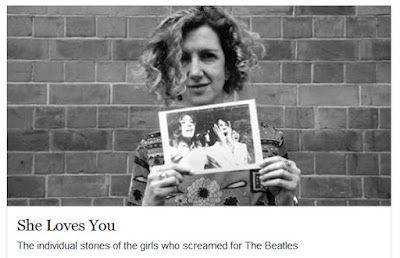 Were You a Screaming Girl at a 60’s Beatles Concert?

Were you one of the many screaming girls at a Beatles concert?
Well author and journalist Eddi Fiegel wants to hear from you for a new book called She Loves You - The Girls Who Screamed For The Beatles.
If you were a teenage girl in the 60s, waiting at airports, railway stations and concert halls and Eddi plans to tell your individual stories.

If you just want to help get the book published
The book is being written for the award-winning British publisher Unbound who are a crowdfunding publisher so this means they are also looking for anyone who would like their name printed in the back of the book in exchange for a small pledge (from £10).
The details are all here:
https://unbound.com/books/she-loves-you