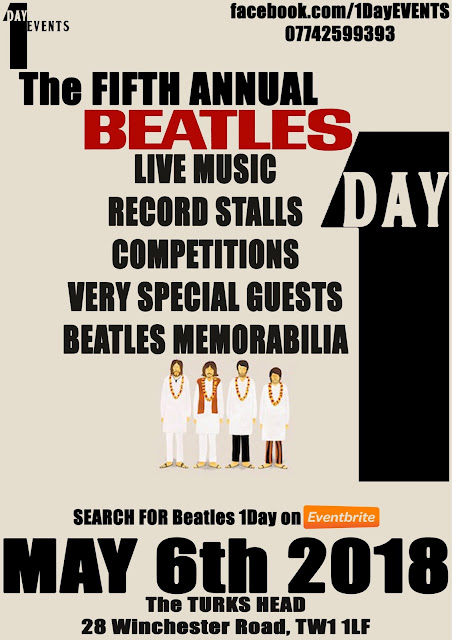 Posted by Michele Copp at 00:29 No comments:

FOR WORLD PREMIERE OF

Show opens at Epstein Theatre on 24 April
The Beatles’ original drummer Pete Best ‘thrilled’ to
meet co-stars as he prepares for stage acting debut
_____________________________________________
New stage comedy Lennon’s Banjo makes its world stage premiere in Liverpool in less than two weeks – and rehearsals are well underway for curtain up at the Epstein Theatre on Tuesday 24 April.
The all-star cast have been locked away in rehearsals as they prepare for the show. Excitement is mounting and the countdown is now on until audiences take their seats for this hotly anticipated comedy which tells the fascinating story of John Lennon’s missing banjo which is now worth millions to whoever finds it.
Lennon’s Banjo runs at the Epstein Theatre from Tuesday 24 April, continuing through to Saturday 5 May. Tickets are already selling fast!
The eight-strong line-up took a break from their busy rehearsal schedule for some real Liverpool fun and frolics aboard the world-famous Magical Mystery Tour bus, taking in the sights and sounds of the city.
Cast members Eric Potts, Mark Moraghan, Jake Abraham, Lynn Francis, Danny O’Brien, Stephanie Dooley, Alan Stocks, and Roy Carruthers were joined by The Beatles original drummer Pete Best to officially launch the show.
Pete Best will make his stage acting debut when he plays himself during three special performances during the two-week run.
Pete’s shows are the 2.30pm matinee and 7.30pm performance on Wednesday 25 April, and the 7.30pm show on Saturday 5 May.  Alan Stocks will portray Pete Best in all other performances. The evening performance on 25 April is sold out.
Pete Best commented: “Lennon’s Banjo is an extremely exciting project to be part of, and I’m thrilled to join such a fantastic cast. The story is fascinating, a real mix of fact and fiction with lots of laughs along the way, so I just know that audiences will fully immerse themselves in the show. The team are so warm and welcoming, and I’m really looking forward to making my stage debut as part of such a great line-up.”
Lennon’s Banjo is set in present day Liverpool. The quest is on to find the holy grail of pop memorabilia – the missing banjo on which John Lennon was first taught to play music by his mother Julia Lennon, who first introduced the youngster to rock and roll.
Mysteriously, the banjo went missing shortly after Julia’s death. One thing is certain though, if it did resurface it is estimated to be worth in the region of five million pounds.
When Beatles tour guide Barry Seddon (Eric Potts) finds a letter written by John Lennon, he unearths a clue to solving the greatest mystery in pop history – the whereabouts of Lennon’s first musical instrument which has been missing for 60 years. But Barry’s loose tongue alerts Texan dealer Travis Lawson (Danny O’Brien) to the priceless relic.
In an attempt to get his hands on the letter and the clues, he persuades his wife Cheryl (Stephanie Dooley) to befriend the hapless tour guide and win his affections. The race to find Lennon’s Banjo is on!
Lennon’s Banjo is based on the 2012 novel Julia’s Banjo written by Rob Fennah and Helen A Jones. The play is produced by Rob Fennah and Pulse Records Ltd in association with Bill Elms and directed by Mark Heller.
The race to find the holy grail of pop memorabilia is on!
The Salvation Army’s Strawberry Field project is the official charity partner of Lennon’s Banjo.
Lennon’s Banjo’s are delighted to be working with its Fab Four Production Partners who are The Cavern Club Liverpool, The Beatles Story, Hard Days Night Hotel, and The Beatles Shop.
Watch the promo video here  https://youtu.be/ddpVnRStAmo
For more info visit www.lennonsbanjo.com
LISTING INFORMATION 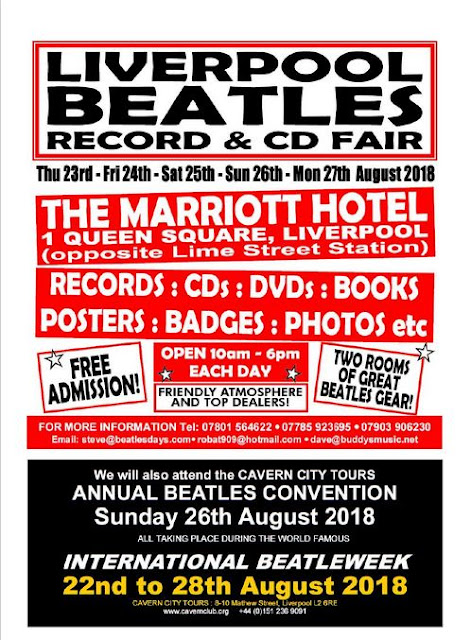 Posted by Michele Copp at 23:20 No comments:

Stop the presses! Unique opportunity for the right person

Want to sing and play rhythm guitar in a top Beatles Tribute Band? The band tour around the world and country, with over 80 shows a year.

Auditions for the role of John Lennon will be filmed for a new television series.

Auditions will be held in London sometime in June. You will need to be available from July 2018.
Please contact: phoebe.janner@twentytwenty.tv
Posted by Michele Copp at 12:33 1 comment: 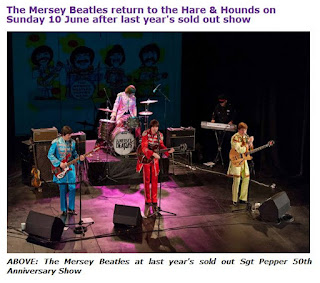 King's Heath Walk Of Fame are delighted to present the return of The Mersey Beatles to the Hare & Hounds after last year's sold out Sgt Pepper 50th Anniversary show. This year's show will celebrate "50 Years of Revolution" with highlights from The Beatles White Album and also the 55th Anniversary of The Beatles final appearance in 1963 at the now burnt down Ritz Ballroom next door to the Hare & Hounds on York Road.

Later this year The Mersey Beatles will be embarking on a major UK tour ending at the O2 Arena in Newcastle so this may be one of the last chances to see them close-up in an intimate setting.

Described by the British Beatles Fan Cub as 'the Best Beatles tribute band', The Mersey Beatles were all born and grew up in Liverpool. They were the resident band at the legendary Cavern Club for over 10 years and now regularly tour throughout Europe and the U.S.A.

John Lennon's sister Julia Baird comparing them to other Beatles tribute bands said 'The Mersey Beatles are the most authentic I've heard ... and I've heard them all'.

A British Beatles Fan Club review said 'The quality of the music was superb with each song reproduced in the original key with spot-on harmonies and perfect guitar solos that had the audience marvelling at the sheer quality of the talent on view'.

Joe Flannery, Brian Epstein's assistant, said 'When I saw them in The Cavern they perfectly recreated the atmosphere that the original Beatles produced. It was like listening to The Beatles again'.

The concert will include sections to commemorate the 50th Anniversary of the White Album and the songs The Beatles would have played in 1963 when they made their final appearance at the Ritz Ballroom plus a fantastic selection of greatest hits.

Please note that the Hare & Hounds is an upstairs standing venue just like the old Ritz Ballroom.

Posted by Michele Copp at 00:22 No comments: