'All You Need Is The Beatles' is appearing at the The Subscription Rooms in Stroud, Gloucestershire on Saturday 7th September to celebrate the 50th anniversary of the release of Abbey Road. They will be performing the LP in its entirety. Learn more here https://thesubrooms.co.uk/event/all-you-need-is-the-beatles/

The Subscription Rooms in Stroud was one of the first venues that The Beatles performed at outside Merseyside. Promoted by jazz musician Jack Fallon (Jack was later to play violin on 'Don't Pass Me By', of course), The Beatles performed at The Sub Rooms on Saturday 31st March with Pete on drums and on Saturday 1st September with Ringo. This will be our tenth consecutive annual appearance at the venue. This band has been celebrating the release of each Beatles album in Stroud since 2013.

In January of this year they recreated the Rooftop Concert on a roof in the nearby village of Minchinhampton. (The Sub Rooms wouldn't give them permission to perform on their roof because of health and safety concerns, so they borrowed a fan's roof.) They even got the police to stop the show! All You Need Is The Beatles Rooftop Concert

Posted by British Beatles Fan Club at 10:24 No comments:

Review: ‘This Girl - The Cynthia Lennon Story’ is superb 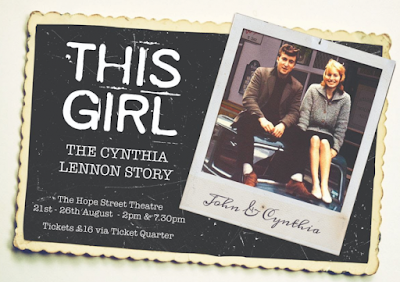 This Girl-The Cynthia Lennon Story.
The Hope Street Theatre- Liverpool August 22nd 2019.
www.hopestreettheatre.com
This new play by Mike Howl focuses on the life of John Lennon’s first wife Cynthia.
The first of two acts stars Christina Rose as Cynthia and Adam Byrne as John. The set consists of just a seat in the centre of the stage and an acoustic guitar. This act traces Cynthia’s life from her time at art college up to the moment she returned from a holiday in Greece to find John at their home in Kenwood with Yoko Ono.
The scenes are intermingled with black and white film footage of the actors shown on a large screen of various incidents that happened during the time, such as John’s first meeting with Cynthia’s parents.
One of the most powerful performances is that of Karen Sharples who plays John’s Aunt Mimi. Mimi is portrayed superbly as the strict person she was, telling both Lennon and Cynthia how stupid they were when telling Mimi Cynthia is pregnant.
Mike Sanders plays Brian Epstein and gives a great performance. His one to ones with Cynthia on stage are very well acted, in particular the scenes where he tells Cynthia that she cannot go to America with The Beatles as he felt it would affect the popularity of the group, particularly the female fans of John.
The script is superbly written, and Cynthia comes across as a woman who never really got over John throughout her life. This mirrors the image portrayed by Cynthia in her interviews on TV throughout her life, particularly in the years following John’s murder.
The scene where Cynthia has her first LSD trip is particularly well acted and scripted. It is from here that Cynthia realises that she and John are going in different directions.
Original music has been provided by Frankie Connor, Alan Crowley and Merseybeat star Billy Kinsley. The standout track is a song called ‘Because I Still Love You’, sung by Peter Durr on just an acoustic guitar.
The end of the first act sees 4 actors on stage. The young Cynthia is joined by the older Cynthia and the young John is joined by a 1969 John Lennon complete with beard and white suit, which was his regular attire in 1969. These older versions of John and Cynthia would reappear in the second act.
The second act sees Cynthia now played by Mikyla Jane Durkan and Lennon played by Peter Durr.
Durkan is superb as this for me was the harder part of Cynthia to play. Her relationship with sonJulian, played by Lee Clotworthy, is very well presented. We also see her meetings with future husbands Roberto Bassanini and Noel Charles. Her meeting with Charles was an interesting part of the play for me as I wasn’t aware that he was a friend of Julian’s for virtually twenty years before he wed Cynthia. Unfortunately, there is no reference to her marriage to John Twist in the play.
The reaction of Cynthia to the murder of John is a brief but moving scene. Cynthia was more concerned for Julian at that time and her subsequent protection of him from the media is beautifully acted out by Durkan. Initially she was concerned that Noel Charles was “after a piece of Julian”, like almost everyone else at the time. Charles wins her round and they eventually marry, (Noel Charles sadly died in 2013). Cynthia then turns to her art and opens an exhibition, which is depicted in one of the final scenes.
The very final scene brings Lennon back to the stage and we reflect on an earlier part of the play where Lennon tells Cynthia “It’s not the first dance that’s important, it’s the last one”. The pair have one final dance to the song “Save The Last Dance for Me”.
The White Feather Foundation, set up by Cynthia and Julian, is something else omitted from the play. Having said that, the play portrays Cynthia in a very positive light, as it should and is well worth seeing if it tours.
“John needed to escape his reality. I understood completely, but I could not go with him”. Cynthia Lennon.
Cast;
Dot Rhone/Mary/Maureen- Ciara O’Neil.
Cynthia Lennon 1- Christina Rose.
Aunt Mimi/Doctor- Karen Sharples.
John Haigh/Julian Lennon- Lee Clotworthy.
Cynthia Lennon 2- Mikyla Jane Durkan.
John Lennon 1- Adam Byrne.
John Lennon 2- Peter Durr.
Stuart Sutcliffe- Lew Freeburn.
Noel Charles- Addae G.
Lillian- Maggie Green.
Jim McCartney/Roberto Bassanini- Kevin Thomas.
Brian Epstein- Mie Sanders.
Freddie Lennon- Uncredited.

Posted by British Beatles Fan Club at 19:12 No comments:

Posted by British Beatles Fan Club at 00:12 No comments: