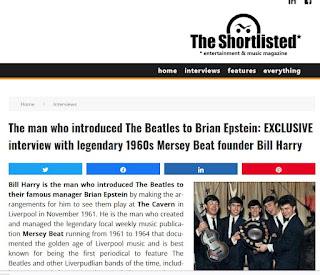 The British online magazine The Shortlisted notified us that they have just interviewed Bill Harry, who is the man that introduced The Beatles to Brian Epstein at The Cavern Club, went to school with John Lennon and Stuart Sutcliffe and created the legendary Liverpool music paper Mersey Beat.

Posted by Michele Copp at 20:52 No comments:

Extensive US Tour This Spring 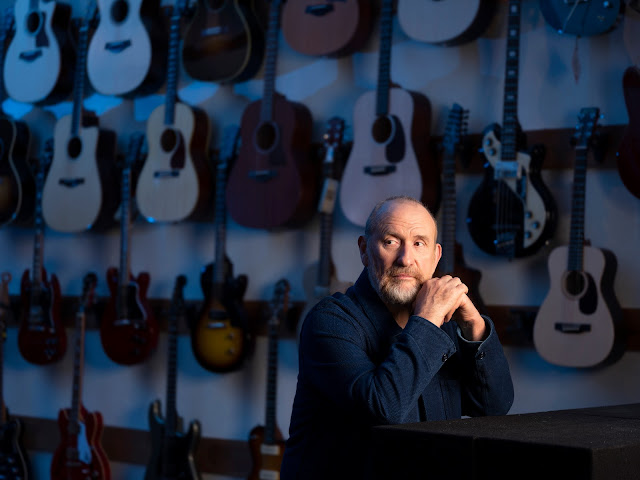 January 24, 2022: Colin Hay is excited to announce that his upcoming album Now And The Evermore will be released on March 18, 2022 via Lazy Eye/Compass Records. Along with the announcement, Hay shared the album’s title track from the album, featuring a guest appearance from Ringo Starr who played drums on the track.

Listen to “Now And The Evermore” HERE`

"’Now And The Evermore’ is a reminder to myself, to make the most of what time I have left walking around on top of the planet,” says Hay. “When I listen to it, it transports me back to when I thought I had all the time in the world. It is a song which is unashamedly inspired by the majesty of The Beatles, and the gift they gave us all. Having Ringo Starr play on the track is more than icing on the cake."

“I’m deeply grateful for the life I have, and I think my natural tendency has always been towards optimism and humor. Lately, though, I’ve had to be more intentional about it. I’ve had to actively seek out the positive, to let new rays of hope shine on some seemingly dark situations.”

That’s precisely what Hay does with his new album. Facing down struggle, loss, and even his own mortality with grit and wit at every turn. Written and recorded in Hay’s adopted hometown of Los Angeles, the collection is a defiantly joyful celebration of life and love, one that insists on finding silver linings and reasons to smile. The music is vibrant and animated, brimming with fanciful melodies and lush orchestration. Hay’s performances draw on vintage pop charm, pub rock muscle, and folk sincerity to forge a sound that’s at once playful and profound, clever and compassionate, whimsical and earnest. At its most basic level, Now And The Evermore offers a deeply personal acknowledgement of the relentless march of time, but zoom out and you’ll see that Hay’s contemplations of identity and eternity are in fact broader reflections on our shared humanity, on letting go of dead weight and reaching for the light no matter how dark things may get.

Born in Scotland, Hay moved with his family as a teenager to Australia, where he first came to international fame with seminal ’80s hitmakers Men At Work. While the band would reach the heights of stardom—they took home a GRAMMY Award for Best New Artist and sold more than 30 million records worldwide on the strength of #1 singles like “Who Can It Be Now?” and “Down Under”—by 1985, they’d called it quits and gone their separate ways.

Hay released his solo debut the following year and, over the course of the next three-and-a-half decades, went on to record twelve more critically acclaimed studio albums that would help establish him as one of his generation’s most hardworking and reliable craftsmen.  Rolling Stone praised his “witty, hooky pop” tunes, while NPR’s World Café lauded his “distinctive voice,” and late night hosts from David Letterman and Craig Ferguson to Jimmy Fallon and Jimmy Kimmel have all welcomed him for performances.

Over the course of his career, Hay has developed a reputation as a gifted raconteur with serious comedy chops, and his frequent appearances at LA’s Largo club helped garner him a legion of fans in the entertainment world. Among them was actor/director Zach Braff, who called Hay’s mix of heartfelt songwriting and hilarious storytelling “one of the most amazing things I had ever seen.” Braff would go on to feature Hay’s music prominently in the GRAMMY-winning soundtrack for Garden State and invite him to appear as himself on the hit series Scrubs, which helped introduce his music to a whole new generation of listeners.

On top of his rigorous schedule as a solo artist, Hay has also managed to tour the world several times over with Ringo Starr & His All–Star Band, release an audiobook of Aesop’s Fables, star in the award-winning documentary Waiting For My Real Life, and even provide the voice for Fergus Flamingo in Disney’s The Wild.

In support of the album, Hay will embark on an extensive US tour starting in March, and will join up with Ringo Starr & His All-Starr Band for a run of dates in June. See list of tour dates below, and for the full itinerary, visit his website: https://www.colinhay.com/tour/

Now And The Evermore Tracklist:

1. Now And The Evermore

3. Into The Bright Lights

4. The Sea Of Always

May 4 - Birmingham, AL @ The Lyric Theatre

May 6 - Houston, TX @ The Heights Theater

Posted by Michele Copp at 20:43 No comments: