A host of top Brazilian bands and artists will hit Liverpool on Saturday 20 July when Brazilica Carnival Day takes over the city centre, rounding off a week-long programme of festival events! As well as a 500-strong evening parade which will fill the city’s streets with colour, sparkle and music, Williamson Square will for the third year running host a music stage throughout the day and evening, hosted by DJs from 107.6 Juice FM. Revellers will be able to eat, drink and be merry as they experience a great programme of music and samba dancing, with an outdoor ‘cocktail shack’ and stalls offering the best in Brazilian food.
Rio-based Beatle Band Sargento Pimenta visit Brazilica for the first time this year and will headline the Juice FM Williamson Square stage. Commanding an audience of up to 100,000 people in Brazil, Sargento Pimenta samba band have helped maintain the global legacy of our city’s greatest musical export The Beatles - in fact, Brazil boasts one of the World’s most avid Beatles fanbases. Sargento Pimenta perform Beatles classics in a fun samba style and are set to have Brazilica crowds singing and dancing along in no time! 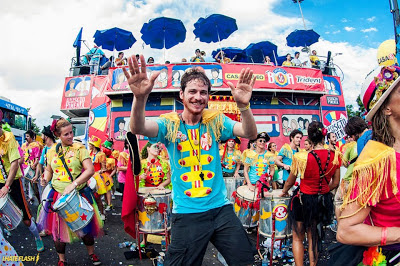 Innovative samba & jazz fusion quartet Tribo Da Pesada will make a welcome return to the Brazilica main stage. Featuring renowned singer Fabio Allman, frontman for Rio superstars Monobloco, a showman used to performing all over Brazil to 100,000 people a time, Tribo Da Pasada wowed crowds at Brazilica 2012. Their 2013 appearance will be even more exciting as the band’s current incarnation boasts even more members! Now featuring 7 musicians, the band incorporates horns and percussion in an exciting fusion of their usual samba sound and sakara (popular Nigerian music).

UK-based Brazilian funk and samba band The Fontanas will this year grace the Williamson Square stage, after playing a great set at last year’s Festinho presents Brazilica Nation charity club night at Nation. Joining them will be Solo Sagrado. Walter Jesus de Magalhães Junior, the band’s lead singer, came to Liverpool from Brazil, became friends with Liverpool Carnival Company’s Roger and Maeve and wrote the Liverpool Samba School’s Enredo in 2008. Roger and his band have since relocated to Barcelona but they are excited to return to Liverpool and perform again at Brazilica.

Liverpool Samba School, Viva Brasil Dance Shows and DJs Gary Garamendi, Silvao & Fabio will also be on hand to ensure Liverpool keeps dancing to the samba beat all day long. Samba schools from around the UK who are visiting the festival and participating in the parade will also appear on stage throughout this scorching spectacle of samba.

Debbie Boyd of Brazilica co-organisers Orb Events said: “The reaction of Brazilian people to Liverpool’s own Brazilian carnival event is amazing - when we mention the city we can hardly believe the great response and the way our musical history has had such a massive impact on a country so far away! Brazilian artists have been so honoured to be asked to join the festival which has now become the biggest in the UK. In addition to Sargento Pimente there is also a wealth of other brilliant musicians and performers that have come to the festival from all over the World.”

Get yourself down to Williamson Square on Saturday 20 July for a real carnival bloc party in the heart of Liverpool!

More information can be found at www.brazilicafestival.com
Keep up-to-date with Liverpool Carnival Company's events on Twitter at: http://twitter.com/brazilicafest