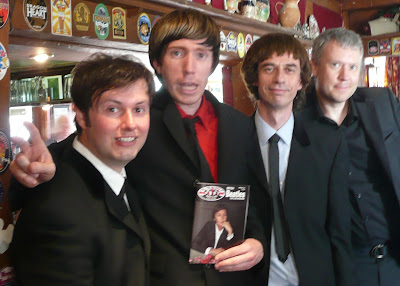 The City Barge pub, based at Strand on the Green, Chiswick, London, W4, is well known to Beatles fans. It is the pub where the Beatles retreated to in the film ‘Help!’, only for Ringo to fall through a trap door into a cellar where he met the Beethoven-loving Bengal tiger.

In reality the pub doesn’t have a cellar due to its location close to the Thames, but there were a number of shots of The Beatles featured in the film that were filmed at this location.

On Sunday 28th July, the pub celebrated this Beatles connection with a special event. From 2.30 a tribute band, The Apple Core Beatles, played three sets from the balcony overlooking the Thames into the early evening. 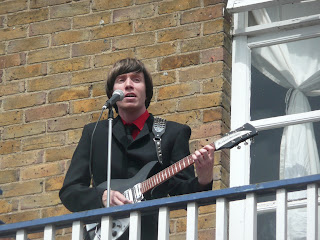 A barbeque feast was laid on and we were treated to some glorious weather (apart from the odd bit of rain that caused the band to stop for a short while).

The first set featured songs from the films ‘Help!’ and ‘A Hard Day’s Night’, focusing mainly on the Beatlemania years. The Apple Cores’ drummer couldn’t play that gig but we were introduced to ‘Jimmy Nicoi’, his replacement. 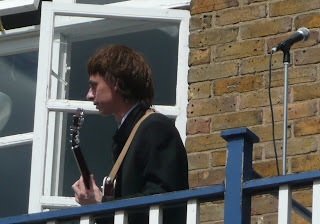 The second set was the most interesting of the three as it featured a number of George tracks including ‘Here Comes The Sun’, ‘If I Needed Someone’ and, to the crowd’s delight, the Traveling Wilbury’s song ‘Handle Me with Care’. At last George’s songs were performed on a par with the Lennon & McCartney ones.
Most of the material played was from the early albums and it got the crowd up on their feet, dancing away the afternoon. Songs from the later albums were also played, notably ‘Back in the USSR’, ‘Get Back’ and, of course, ‘Hey Jude’. 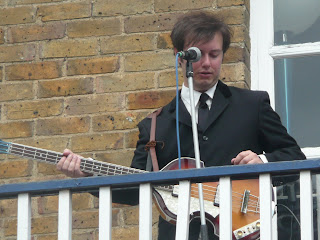 From what I could gather, the majority of those there were regular customers and have probably never seen a Beatles tribute band before, so all in all it was a great event for the locals. The Apple Cores are working hard on their harmonies and we look forward to hearing some more polished performances.

It was a great day in beautiful sunshine at a Beatles film location- what more could you want- and to top it all the film ‘Help!’ was being shown throughout the day inside the pub, and the beer is good!