We are all delighted with the news that "Epstein: The Man Who Made the Beatles" will be opening in the West End on July 30.  It's a truly fabulous play and is not to be missed.  To read our review of the play when it was first performed at the Epstein Theatre in Liverpook, click here 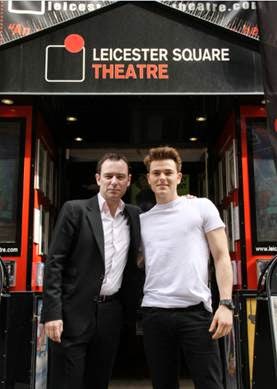 Starring Andrew Lancel as Brian Epstein, with Will Finlason as ‘This Boy’

The cast and producers of Epstein: The Man Who Made The Beatles - the long-awaited play about the legendary music manager Brian Epstein - visited London’s Leicester Square Theatre last week to officially launch the show’s initial 6-week run at the venue this Summer.

2014 also sees Brian Epstein posthumously inducted into the Rock & Roll Hall of fame after a campaign from fans and also the unveiling of a commemorative blue plaque at the London offices of Epstein’s company NEMS.

Epstein: The Man Who Made The Beatles is the untold story and window into the private world of the music entrepreneur whose stellar career as Beatles Manager made him a household name yet whose controversial personal life remained very much in the closet. Brian died in 1967 of an accidental overdose at the age of 32.

Acclaimed stage and TV star Andrew Lancel (Coronation Street, The Bill) and actor Will Finlason will return to the roles of Brian Epstein and the fictional character ‘This Boy’ respectively, for which they each received rave reviews during the initial run of Epstein: The Man Who Made The Beatles in Liverpool, where the show premiered in November 2012 as part of the city’s official Beatles 50th Anniversary celebrations at the Epstein Theatre.

Andrew Lancel said: “As a huge Beatles fan I am absolutely delighted to be returning to London and this role, wonderfully written by Andrew Sherlock. Especially in the year that would have seen Brian Epstein celebrate his 80th Birthday. It was great to see and chat to so many media representatives from outlets all over the World who wanted to hear more about the play.”