Guitar brand Höfner has loaned four one-off replica guitars used by Paul McCartney and John Lennon to the award-winning Beatles Story in the Albert Dock as part of their 25th birthday celebrations.
The 1964 Vintage 500/1 Bass, the Paul McCartney 500/1 Backup Bass, the Jubilee 500/1 Bass and the Club 40 John Lennon re-issue Guitar will go on display in the Paul McCartney and John Lennon solo rooms in the Albert Dock on 12th June.
These incredible items are on loan to the attraction for three months and each guitar tells its own story. 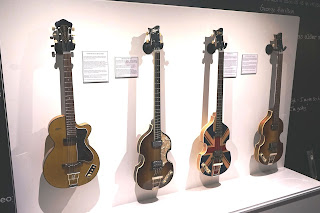 As The Beatles took the world by storm, conquering the USA in early 1964, every bass player wanted a Vintage 500/1 Bass, just like Paul McCartney’s.
The 1964 example of the bass is very similar to Paul McCartney’s. During 1964 Höfner worked hard to try and keep up with demand for the bass and probably sold more examples of the model that year than any before or since.
In 2009 Höfner were commissioned by Paul McCartney to produce a 500/1 Backup Bass for him. The request was for a bass built to the same specifications as his 1963 model that he uses for all concerts and for recording. It was built to exactly the same dimensions and used the same hardware.
Only two of the Backup Basses were made, one of which is of course with Paul, the other is retained by Höfner for very occasional exhibiting such as this. The bass will never be sold and there are no plans to produce any more.
Thirdly, when her Majesty celebrated her Diamond Jubilee in 2012, part of the celebrations included a special Jubilee concert with the headline act being Sir Paul McCartney. Höfner decided that they would produce a Violin Bass with the Union flag sprayed on the top and offer this to Paul for the concert.
Two were made (a backup is always produced) and one of these sent to Paul just before the concert. The photos of Paul McCartney proudly holding the guitar aloft became one of the defining images of the event.
Subsequently a very limited edition of the Jubilee 500/1 Bass was produced and soon sold to collectors worldwide. This bass is the 2nd of the two originally produced. A careful look and you will see just how hurriedly it had to be sprayed in order to meet the deadline for that famous concert! It will never be sold and there are no plans to produce any more.
Lastly, the first electric guitar owned by the legendary John Lennon was a Höfner Club 40, bought on hire purchase from Hessy’s music shop in Liverpool in 1959. Prior to this he had played an acoustic but clearly needed something that could be amplified so he pestered his Aunt Mimi until she agreed to accompany him to buy a guitar. She put down a £17 deposit and co-signed the hire purchase agreement and John came home with a shiny new Höfner.

This guitar is a limited edition (120 examples) re-issue of the 1959 Club 40 as once owned by John. All have a reproduction of John’s signature on the scratchplate. John kept his Club 40 for about one year and then purchased a Rickenbacker “Capri”. He loaned the Club to Paul for a short while and then he sold it, probably in Hamburg. It has never been seen since.
Martin King at the Beatles Story in the Albert Dock said: “The loan by Höfner is an extremely welcome addition to the Beatles Story and the stories behind each guitar will I’m sure be familiar to Beatles fans and keen musicians world-wide.
“Our visitors will just love these. It is particularly fitting that we have them in a few days before Paul McCartney’s 73rd birthday too. The fact that they are so rare and that they will never be made again will really appeal to Beatles superfans. We’d like to thank Höfner for the loan, we are always looking to add to what we have on offer here and this is an incredible addition.”
Nick Wass Marketing Manager at Höfner GmbH said: “We are delighted to have been invited by the Beatles Story to be part of their 25th anniversary celebrations. We have been associated with The Beatles and the great city of Liverpool for many years and it is brilliant to still be part of this wonderful heritage. Happy Birthday from Germany!”
The Höfner guitars will be on display from 15th June until 12th September 2015 in the solo section of the exhibit in the Albert Dock.
Posted by Michele Copp at 00:25