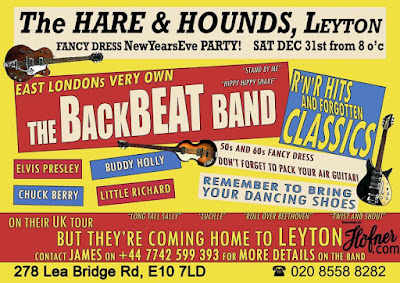 When: Saturday December 31 from 8pm

What: Be transported to the hot, sweaty, smokey, and ELECTRIC early days of British rock & roll with the The BackBEAT Band! Playing all the rock & roll and rhythm & blues belters that were in the The Beatles and Rolling Stones very first sets - when circle skirts, bobby socks and pony tails, DA's, drainpipes and winkle pickers, and jiving like your life depended on it, were the order of the day!

Playing fantastic numbers by the likes of Little Richard, Carl Perkins, Chuck Berry, Smokey Robinson and The Isley Brothers, Elvis Presley, Buddy Holly plus plenty of toe-tappers from the Fab Four to take you into the new year, get yourselves a shot of rhythm and blues with The BackBEAT Band and get ready for BackBEATmania!!!
Posted by Michele Copp at 01:13