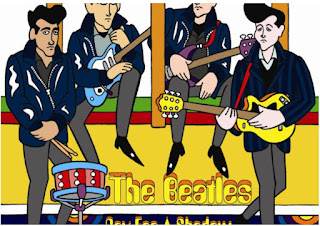 We received an email this week telling us about this campaign to release a new Beatles  coloured, shaped vinyl single of "Cry for a Shadow" and said we would help spread the word.  Below is the message and a link to the funding campaign where you can learn more about the project led by Joe from Germany.

"For years I did a record label, putting out lots of different kinds of music. As close as I got to the Beatles in the heyday of my label many years ago were two Denny Laine solo CDs that I licensed from England for the German market, one of which featured Paul McCartney as a guest.


For the last several years, I have been winding the label activities down, but the final release on the label was supposed to be a Beatles vinyl project. Somehow though, it is just beset by bad luck, and is still not out.


"I was hoping you could announce the project on your site so that Beatles fans will know about it. I know the track is old and often released,  but to make up for that, I plan on making sure it gets put into a packaging that would make even the Beatles proud, with colored, shaped vinyl, a wonderful full color open up cover, as well as a Klaus Vormann licensed art on the inside, something that this track has not yet seen. The artwork you can also see on the site."

If this has piqued your interest, click here to go to the crowd funding campaign to learn more.
Posted by Michele Copp at 14:25