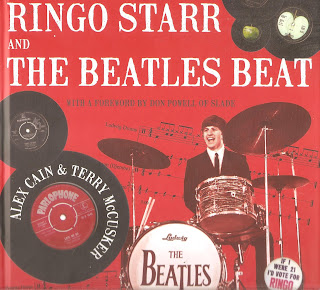 At last a book about Ringo and drumming.

The authors have both enjoyed careers as drummers, and with a foreword by Don Powell, (the drummer with glam rock band Slade), we have the ideal book for drummers and Ringo fans.

Terry McCusker witnessed The Beatles live at the Cavern in the early 1960’s, and along with Alex Cain have put together an appreciation of Ringo and his drumming.

When I first read the book, my initial reaction was that it was targeted for drummers, but as I went further into it, I found myself reading a real appreciation of Ringo.

The book begins with a section of how to use drum notation, and what the different parts of a drum kit are, followed by a short piece on Terry’s recollections of Merseybeat and The Cavern.

The book then looks at some of the many drummers The Beatles had before Ringo came along, including Colin Hanton, Mike McCartney, Garston Bottle Works very own Tommy Moore, and, of course, Pete Best.

A mini Ringo biography follows, before we look at the two drummers who played with The Beatles after Ringo had joined- Andy White, Jimmy Nicol and Paul McCartney.

Ringo’s styles and kits are then analysed. I found the drum kits especially interesting.

The book then looks at recording and the producers and engineers of The Beatles’ records, before we get to the nitty gritty of the book.

Of the 400 pages, 262 look at The Beatles songs, with brief information of each song, and part of the drum notation, so if you own a drum kit, you can play along. When I got to this part, I was tempted to get a drum kit and try it out, but my room is too small!

All in all, a book all drummers should own, and one many Beatle fans, particularly those that love Ringo and have an interest in playing, will thoroughly enjoy.