Get your tickets for Beatles Day in Dublin! 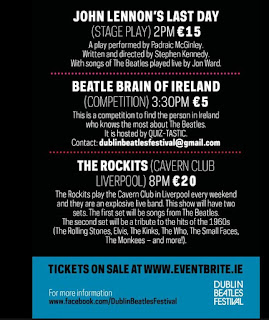 BEATLES DAY in Dublin is taking place this year on Saturday, November 4th.

It will be at the Workman’s Club in Dublin city centre. The events on the day will include a two set show from THE ROCKITS. They perform at the Cavern Club in Liverpool every weekend and they really know how to throw a party. The first set in the show will be a selection of songs from The Beatles and the second set will be the ‘Hits of the 60s’ - songs from The Rolling Stones, Elvis, The Kinks, The Small Faces, The Monkees - and more!

There will also be a performance of Stephen Kennedy's play JOHN LENNON’S LAST DAY (as recently heard on BBC Radio 2) – and a competition to find the person in Ireland who knows the most about The Beatles – THE BEATLE BRAIN OF IRELAND.


Learn more and get tickets
Posted by Michele Copp at 17:49