Let It Be Returns! 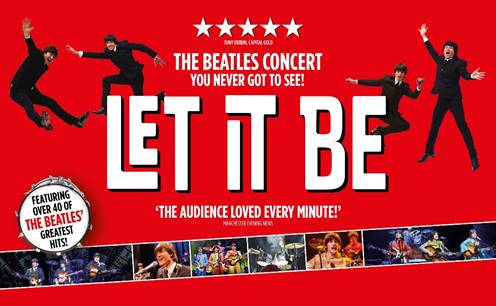 LET IT BE RETURNS TO CELEBRATE
THE MUSIC OF THE BEATLES
·        NATIONAL UK TOUR OPENS SUMMER 2018
____________________________________________
Let It Be: A Celebration Of The Music Of The Beatles has firmly established itself as a successful West End and international touring show.
And now the smash-hit stage show has been updated and is back on tour, featuring a brand new Let It Be Part II – which has never been seen before in the UK.
Let It Be returns for a UK national tour this Summer and Autumn, before taking to the world stage once again.
The show is a celebration of the phenomenal music of The Beatles, and has already been seen by more than two million people worldwide, including an acclaimed run in the West End and two UK tours.
Let It Be is the ultimate experience for Beatles fans, and features many of the Fab Four’s best loved songs including A Hard Days Night, Day Tripper, Sgt. Pepper’s Lonely Hearts Club Band, Twist and Shout, I Want To Hold Your Hand and Strawberry Fields Forever.
The team behind international hit stage show Let It Be, have come together once again to create a very special show for fans by incorporating a brand new Let It Be Part II into the show.
The updated Let It Be production will be premiered in the UK when it opens at Cardiff’s Wales Millennium Centre on 20 August 2018.
The show will then embark on a UK, European and international tour taking countries including Germany and North America.
Beatles fans are invited to join John, Paul, George and Ringo for a great night of live music. Enjoy the early beginnings at the word famous Cavern Club, through to the height of Beatlemania.
In a twist from the original Let It Be show, audiences will then be taken on a Magical Mystery Tour to experience the concert that never was.
Part II of Let It Be is the brand new part of the show, giving audiences the rare opportunity to see The Beatles reunite for one night only, set a decade after the group went their separate ways.
After opening in Cardiff, the updated Let It Be show will then visit Cheltenham, Liverpool, Nottingham, Hull, Edinburgh, Dartford, and Manchester.
WHAT THE CRITICS SAY ABOUT LET IT BE
‘The Beatles are back sending theatre audiences dancing into the aisles’
Reuters, New York
‘Winning over an Empire full of Liverpudlians (including John Lennon’s sister Julia) is no mean feat. But one that Let It Be happily achieves’
Liverpool Echo
‘Fab for all the family’
The Times of London
‘The gig that Liverpool never had is now the gig that Liverpool cannot do without’
Liverpool Sound and Vision
‘Does everything and more to recreate that magic era’
Manchester’s Finest
Website:         www.LetItBeLive.com
Facebook:       /LetItBeUKTour
Twitter:           @LetItBeUKTour
LET IT BE UK 2018 TOUR
CARDIFF
Wales Millennium Centre
Monday 20 August – Saturday 25 August 2018
029 2063 6464
www.wmc.org.uk
ON SALE NOW
CHELTENHAM
Everyman
Tuesday 28 August – Saturday 1 September 2018
01242 572573
www.everymantheatre.org.uk
ON SALE NOW
LIVERPOOL
Empire Theatre
Monday 3 September – Saturday 8 September 2018
0844 871 3017
www.atgtickets.com/venues/liverpool-empire/
GENERAL SALE: MONDAY 29 JANUARY 2018
NOTTINGHAM
Royal Concert Hall
Monday 10 September – Saturday 15 September 2018
0115 989 5555
www.trch.co.uk
GENERAL SALE: FRIDAY 26 JANUARY 2018
HULL
New Theatre
Monday 24 September – Saturday 29 September 2018
01482 300306
www.hulltheatres.co.uk/
ON SALE NOW
EDINBURGH
Playhouse Theatre
Monday 8 October – Saturday 13 October 2018
0844 871 3014
www.atgtickets.com/edinburgh
GENERAL SALE: MONDAY 29 JANUARY 2018
DARTFORD
Orchard Theatre
Monday 15 October – Saturday 20 October 2018
01322 220000
www.orchardtheatre.co.uk
ON SALE NOW
MANCHESTER
Opera House
Monday 22 October – Saturday 27 October 2018
0844 871 3018
www.atgtickets.com/venues/opera-house-manchester/
GENERAL SALE: MONDAY 29 JANUARY 2018
Posted by Michele Copp at 23:22