Preview Review- Maharishi and Me: seeking enlightenment with The Beatles’ guru

The following review is just a sample the content that is in the June issue of the magazine which will  be published in just a few weeks.  Members get four issues a year.  Join here. 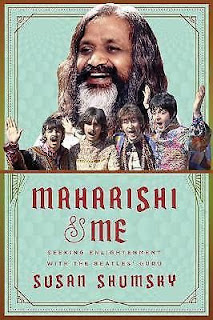 Susan Shumsky is well-placed to write a book about the Maharishi Mahesh Yogi – she was a pupil of his for over twenty years and immersed herself in his teachings, his method of meditation (Transcendental - TM) and in his Spiritual Regeneration Movement. In 1966 a teenage Susan, like many of her peers, left home and headed to the hippy scene in Oakland, California. There she began to indulge in the sex and drugs lifestyle, trying LSD and similar mind-expanding drugs in search of something deeper and more meaningful. During this time, she met someone who suggested that there was another way and within days she chanced upon Autobiography of a Yogi by Paramahansa Yogananda just as George Harrison had during the filming of Help!. This book and encounter was to change her life. Susan then was introduced to Transcendental Meditation and her lifelong spiritual journey began.

“This memoir will raise the veil to uncover how Maharishi captivated me, transformed me and then released me to find self-empowerment in my own spiritual pathway.” Shumsky does not hold back. This is a ‘warts and all’ account of her direct experience with Maharishi and his methods of teaching, his manipulation of his students and staff and his personal foibles. But all throughout she maintains a strong regard and respect for Maharishi as a spiritual teacher (guru) and a man.

Shumsky makes a clear point that the methods practiced by Maharishi may seem cruel and uncaring but were intended to free his students from their egos. “Once we let go of ego attachment, we become our own guru and miracle maker.”

A significant portion of the book and accompanying images is devoted to the Beatles’ experience at the Maharishi’s ashram in Rishikesh. It must be stressed that the author never met the Beatles but her stories about them in India come from known sources and, more interestingly, from people who were there, people other than the ones we have already heard from. One can’t help but wonder that her publisher asked Shumsky to add these stories to make the book more appealing to a wider audience. Well, it works. Shumsky covers the episode with Alexis Mardas, aka ‘Magic Alex’, and the now-identified woman he probably collaborated with to discredit Maharishi, leading to John and George and their wives leaving the ashram abruptly. Without giving too much away, Shumsky’s account of the Beatles’ time in Rishikesh is an eye-opener and one that every Beatles fan should read and consider carefully in light of the author’s experience of meditation and Maharishi’s methods.

As to the contemporary negative views of Maharishi and his teachings, Shumsky rightfully points out that it had always been the case that gurus came from the Brahmin caste in India. Maharishi did not. Also, the teaching of meditation to achieve a higher spiritual status was intended to be provided with no charge. Maharishi was heavily criticised for his focus on Western pupils who were very willing to pay sometimes quite large sums of money to learn from him. But…”Maharishi transformed the world by introducing and popularising meditation into Western culture.”

Her recall is astonishing; the level of detail in her descriptions of the events spanning from 1966 to the present implies she kept a diary although nowhere in the text does she state this. The reader must take it on trust that she recalls these events and those that she was told about accurately. The chapters are presented chronologically which is a big help in following the complicated machinations of her spiritual journey. Most of the chapters start with one of Maharishi’s sayings which, for me, gives so much more insight into his actual teachings then I have hitherto encountered before. Some years ago, I underwent a weekend training course and subsequent follow-up sessions in TM near Marylebone Station in London and although the Maharishi was still alive at the time, I was never privy to any of his teachings.

In this book Susan Shumsky presents an intense insight into TM and Maharishi in an easily understandable manner. This book is a joy to read.