The Beatles liked the Crickets - do you?

One of the many early rock and roll groups who influenced the boys who would meet and eventually become The Beatles was Buddy Holly and the Crickets.  We happen to like them too, so we are happy to spread the word about this show in Twickenham coming this June. 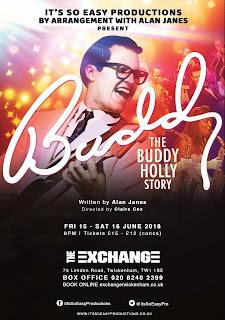 BUDDY - THE BUDDY HOLLY STORY
With audiences around the world dancing in the aisles this legendary production hits The Exchange, Twickenham. Oh Boy! Rave On! Peggy Sue! That’ll Be The Day! - All smash
hits of the golden days of rock ’n’ roll, when ‘doo-wops’ and ‘ah hey, ah hey, heys’ rang out
from every jukebox!

If you weren’t born then, or were too young to be a part of this exciting period of musical history then you won’t want to miss out on the electrifying party that is Buddy - The Buddy
Holly Story!

Experience the ups and downs of Holly’s ‘budding’ musical career as he strives to fulfil his potential genius. The heart-warming tale of a small town all-American boy is told with care, detail and humour. Buddy - The Buddy Holly Story finally explodes into a celebration of youth and lust for life in a re-creation of his last concert at Clear Lake!

This immaculately stages production gives some of the nation’s best musical talent the chance to perform Buddy Holly’s music as it will always be remembered and always should be performed - with youth, joy and bounces enthusiasm. Remember, there are many imitations but only

Email ThisBlogThis!Share to TwitterShare to FacebookShare to Pinterest
Labels: Other groups