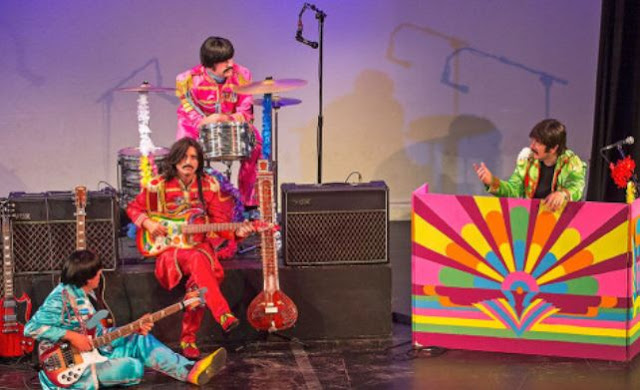 
"Our newly produced theatre show brings you the very best for John, Paul, George and Ringo.

The Upbeat Beatles take you on a journey through the most remarkable story in the history of rock and pop music.

Using projection and narrative, teamed with the pinpoint accurate music and vocals of the band, this show takes you on a “Magical History Tour”, travelling through the ages of The Beatles’ relatively short yet amazing career.

The Upbeat Beatles recreate the sheer fun, excitement and magnetic power of The Fab Four and the unforgettable music they created, with their attention to detail and stunningly precise reproduction.

Covering the beginnings at The Cavern Club in Liverpool.
The frenetic, early TV appearances.
Conquering America at Shea Stadium.
Frenzied “Beatlemania” in the early 60s.
The colourful, psychedelic, Flower Power era of Sgt Pepper’s and The Magical Mystery Tour.
The landmark final performance in 1969 atop the Apple Building in London."

Find a show and buy tickets here
Posted by Michele Copp at 21:28