The first issue of 2019 is in the post to all our members! Read below to see what's stuffed into this issue. Non members can order a copy from our website here.

Posted by Michele Copp at 21:45 No comments:

Currently touring the UK, this excellent show is a celebration of the album Sgt. Pepper. The show was originally premiered in Liverpool in May 2017 as part of the Pepper at 50 celebrations.

Performed by the Mark Morris Dance Group, the show contains six songs from the album plus ‘Penny Lane’ intertwined with a score by Ethan Iverson based on the album, the concept and the album sleeve. It’s an interesting take on the album with virtually all the cast being from the USA.


The choreography throughout is superb. The dancers are in colourful outfits. The only thing I couldn’t work out was what the back drop of the set meant.

The show opens with ‘Sgt. Pepper’ followed by ‘Magna Carta’, part of the score which introduces some of those who feature on the album cover. What was particularly great about this was that some of those lesser known people on the sleeve were mentioned. The cast also didn’t try to look like those who were introduced. Marilyn Monroe appeared as a brunette and we also had a black Albert Einstein. These things added to the joy of the show which I took to mean that it doesn’t matter what or who we are- we are all one, something The Beatles would have appreciated with their messages of peace and love.

‘A Little Help from My Friends’ and ‘When I’m Sixty-Four’, come before one of the best parts of the show. ‘Within You, Without You’ has one of the dance group sat close to the front of the stage in dark glasses, which reminded me of the ‘Blue Jay Way’ sequence from the Magical Mystery Tour film. He is motionless throughout whilst the rest of the group dance around the stage. It was very pleasing that this song was included in the show.

After some more music from the score we have ‘Penny Lane’ and then ‘A Day in The Life’. ‘A Day in The Life’ was for me the best part of the show. As the song was being played instrumentally, the dancers acted out the words with magical sequences. ‘I read the news today oh boy. The English army had just won the war’ was acted out with dancers crawling on the ground like soldiers, before standing up, saluting and giving the peace sign. This was just one example. I don’t want to give everything away.

We close with the ‘Sgt. Pepper Reprise’.

The songs are sung beautifully by Clinton Curtis. It would be wrong of me to single any of the dancers out for special praise as they were all superb. The show lasted just over an hour, and the cast received a standing ovation at the end.

If you are in the UK, you don’t need to spend thousands of pounds going to see Love in Las Vegas. You will have just as much fun seeing this magical show. If you get the chance go and see this magical show and celebration of one of the greatest albums ever made.

The show is also supporting people suffering with Parkinson’s Disease. There are special dance classes happening in the towns and cities where and when the show is touring. For more information go to www.danceconsortium.com or www.danceforparkinsonsuk.org

~Ernie Sutton.
Posted by Michele Copp at 13:02 No comments:

Win Tickets to see LET IT BE!

The British Beatles Fan Club has partnered with the organizers of the Let It Be! to offer this competition.

THE PRIZE:  One pair of FREE tickets to the Let It Be Show (to the opening night of location of your choice). The newest version of the show includes a new second act with a "must see" reunion.  Five pairs to be won!

WHO CAN ENTER: This competition is open only to British Beatles Fan Club members.

HOW IT WORKS:  Answer the trivia question below and send the answer to us via email along with your name, membership number, and the tour location you want to attend (see list at the bottom of this page).

THE QUESTION: Which Bob Dylan song is mentioned in the lyrics of a song on the album Let it Be?  Please name the Beatles song that mentions it and the Dylan song.

THE FINE PRINT: The winner is responsible for all other costs for attending the show including but not limited to transportation.  The prize is two tickets only.

HOW THE WINNERS ARE CHOSEN: All entries with the correct answer to the trivia question will be put into a hat.  Five names will be drawn and those winners will be contacted to identify which opening night date/location they want to attend.  The winners will work with the show promoters to arrange for their tickets.

THE DEADLINE: The contest closes at midnight UK time on Monday April 1, 2019.

Deadline tomorrow for The Peoples Beatles photo project for charity

Deadline to submit photos and be included in the book is Friday March 15, 2019.

Click here to find out more and submit
Posted by Michele Copp at 15:43 No comments:

Celebrating The Beatles in Shrewsbury in September

If you're going to Beatleweek at the end of the summer and want a cure for the inevitable downer that happens when you return home, or if you aren't able to go to Beatleweek and want an alternative, either way, the press release we are sharing below is your perfect solution! 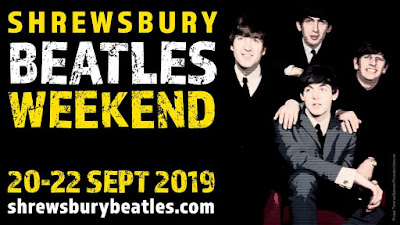 It’s almost impossible to imagine the modern world without The Beatles. Their impact upon popular culture has been – and continues to be – enormous. Their music and their iconic image are loved by young and old alike.
This year, Shrewsbury will be celebrating all things Fab Four with the Shrewsbury Beatles Weekend.

On September 20th, 21st and 22nd there will be a whole range of events in the county town including live music, special guest speakers and Beatles film screenings – once again proving that All You Need Is Love.

The weekend will culminate with a concert at Theatre Severn featuring – from Liverpool – the top Beatles tribute band, The Mersey Beatles.

What’s more: the entire weekend is in aid of the Mayor of Shrewsbury’s charity 2019-20, the Samaritans of Shrewsbury.

Shrewsbury Town Councillor Phil Gillam, currently deputy mayor and due to be mayor from May, says: “I’m a lifelong Beatles devotee and I wanted to devise a fundraising event that would be tremendous fun but also something that would be close to my heart in every way.

“So, a Shrewsbury Beatles Weekend seemed the perfect answer – and the icing on the cake is that it will be in aid of the Shrewsbury Samaritans, a fantastic and entirely local, self-funding charity that does a phenomenal amount of good right across our community.”

Events for Shrewsbury Beatles Weekend will be centred largely around Theatre Severn with film screenings and special guest speakers – plus the main concert on the Sunday night.

There will be additional events across Shrewsbury including musicians presenting live renditions of Beatles songs in the cellars of The Butter market, a venue reminiscent of the legendary Cavern Club in Liverpool where the Fab Four first attracted attention.

“Of course, Shrewsbury does have genuine connections to The Beatles,” said Mr Gillam. “They played here three times – once at The Granada, twice at The Music Hall – and they even wrote one of their biggest hits, ‘From Me to You’, while travelling from York to their next gig in Shrewsbury in February 1963.

In addition, it’s the 50th anniversary of The Beatles’ classic album, Abbey Road, this September and The Mersey Beatles will be performing the album in its entirety as part of their act.

Fellow organiser Tim King said: “We are just so excited about this event. The world-wide impact of The Beatles extends far beyond music. Pushing aside the post-war drudgery of the 1950s, this band emerged as beacons of hope. With their attitude, their sharp wit and of course their extraordinary records, they influenced the worlds of fashion, media and so much more. Today – almost half a century since the group broke up – they continue to be loved the world over.”