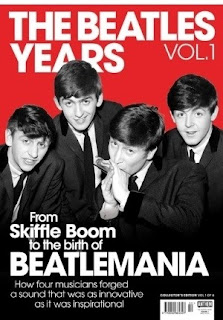 When I first saw this, I wondered what new information I could find out. As I read the first page, I started to doubt the content as the date of John and Paul’s first meeting was stated as 6 July 1956, when any Beatle fan worth his or her salt knows it was 1957.

However, as I started to read the book, I found the early part of their career particularly interesting. There is a terrific photograph of The Quarrymen performing in 1997 performing at the 40th anniversary of the garden fete where John met Paul (so they did know the date!). It features Eric Griffiths and is one of the few colour pictures I have seen of The Quarrymen with Eric.
There are features on Tony Sheridan, who performed ‘My Bonnie’ with the band, which was released as a single in Germany and was the record that alerted Brian Epstein to the existence of the band.

Their stints in Hamburg feature quite heavily in the early part of the book.

There is a large feature on Brian Epstein. The Pete Best sacking is written about drawing information from The Anthology and as we progress through the book it covers their fashion and hairstyles. The first two albums Please Please Me and With The Beatles have the songs with a brief piece about them. Some are analysed from what The Beatles thought about them drawing information from many sources such as the book Many Years From Now by Barry Miles, and John Lennon’s interviews with David Sheff in 1980.

We end this volume just as Beatlemania had broken in the UK. A good read for fans old and new. Those of us who know the story won’t learn anything new, but for fans who only know part or none of the story, this will be a good read.

Review: Let It Be with new "reunion" - Norwich 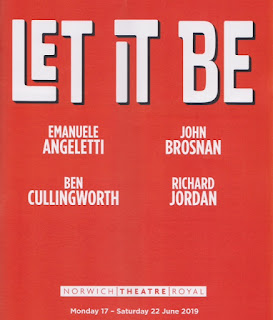 I was fortunate enough to be in Norwich, home of Tony Sheridan, Pablo Fanque (and more recently BBFC chairman Pete Nash) for the first night of the revamped LET IT BE show at the Theatre Royal.
I had previously seen the London show back in 2012 when it was advertised as a West End musical (with ticket prices to match!) and, although the standard of musicianship was good, I didn't rate the experience as any better than a number of Beatles tribute bands who were around at that time playing in pubs for a fraction of the price.

This time around though, the publicity promised a twist; "the Beatles reunion you never saw" -  with the entire second half of the show where the idea was to "imagine" what a John, Paul, George and Ringo reunion concert in 1980 could have been like. At the very least, that made a change from seeing the standard two hours of non-stop Beatles hits (enjoyable though that is!)
All four musicians, Richard Jordan (John), Emanuele Angeletti (Paul), John Brosnan (George) and Ben Cullingworth (Ringo) played their parts brilliantly, with believable mannerisms and a stack of original instruments and equipment. Emanuele Angeletti as "Paul" probably looked the most like his original (the more recent original if you believe the Paul Is Dead rumours) and mimicked Macca's stage persona very well. He had also learnt to play bass left-handed which is always impressive.

In the first half of the new show, the band flew through the Beatles career from 'She Loves You' to 'The End' via Shea Stadium and the Sgt Pepper era. My personal favourite songs from this section were 'Strawberry Fields Forever' (with full fade-in outro) and 'A Day In The Life' (complete with Ringo holding up an alarm clock). Both songs showed what a great drummer Ringo was for the band originally, and how his counterpart in the show did a fine job of matching him.

The second half of the show, the reunion set, opened with the harmonies of 'Because'  straight into 'Jet' so right away the audience was given something different from the average Beatles tribute. The band then alternated John Paul George and Ringo solo songs, but stopped at George the second time around meaning Ringo's sole contribution was 'It Don't Come Easy'. Surely one of his other 70s classics like 'Photograph', 'Back Off Boogaloo' or even 'You're Sixteen', all huge and well-known hits, could have made the cut for a show like this. Instead, the band fell back on better known later Beatles songs towards the end of the concert, probably to keep a more general audience interested. Also, the inclusion of 'Blackbird' in the solo set was a bit out of place, especially as Paul's biggest hit 'Mull Of Kintyre' was omitted?

John's contributions were a rare chance to hear '(Just Like) Starting Over' which sounded brilliant live, 'Imagine' (strangely with George playing piano) and 'Watching The Wheels' - undoubtedly a classic but a slightly odd choice for a live show where a more upbeat number such as 'Instant Karma' or a better known song like 'Woman' might have appealed more to the audience. The last song before the encore was a real highlight; 'While My Guitar Gently Weeps' with some fantastic solos from George. The final performance of the night was of course 'Hey Jude' (which I believe is now legally required to be the last song at any "Beatles" gig or national event, complete with "now all the boys/girls sing" copyrighted by Macca).

Overall, whilst we could all pick different sets based on our personal favourite songs, particularly from the solo years, the show gets a solid 8 out of 10 from me, as it was great entertainment and the performers are certainly very talented musicians, with "Paul" "John" and "George" all alternating between bass, lead guitars and piano effortlessly. I also enjoyed the "in" jokes like Paul's 'heart-attack' reaction after 'Live And Let Die' and Ringo waving a large Union flag to reference the real Ringo's support for democracy and his banging-the-drum for Brexit.
I am not sure for how long or where next the LET IT BE show may tour next, but I certainly recommend seeing it if it comes near your town soon.

Posted by British Beatles Fan Club at 01:22 No comments: 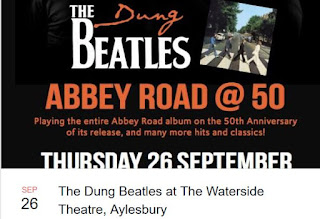 This will be very special!
50 years to the day since the release of Abbey Road, The Dung Beatles will be performing the entire album start to finish at the wonderful 1,200 seater Waterside Theatre in Aylesbury Bucks, 26th Sept.
The band will be joined onstage by their superb 4-piece horn section, The Hornettes, and will follow up Abbey Road with a second set of terrific Beatles hits and album tracks from across their repertoire.
The gig is being staged by the iconic Friars Aylesbury Music Club, whose 50th Anniversary coincidently falls this year as well!! Party, party!!!

For tickets and details of this historic evening click the page below The Dung Beatles at The Waterside Theatre, Aylesbury or visit www.atgtickets.com


Tell them the BBFC sent you!

Posted by British Beatles Fan Club at 11:15 No comments:

There have been plans for some time to erect a statue for Brian Epstein in Liverpool.

Kevin Roach, the director of Beatles Liverpool and more Ltd was invited to sit on the committee for the statue, and as part of the committee he has produced a book with all profits going to the statue for Brian fund.

Brian's family in Liverpool are supporting the fund raising committee and this is your chance to add your support of the project.

Use the link below to learn more about the book and others who are supporting the project including Julia Baird and Larry Kane.

Posted by British Beatles Fan Club at 23:21 No comments:

Email ThisBlogThis!Share to TwitterShare to FacebookShare to Pinterest
Labels: Statue for Brian 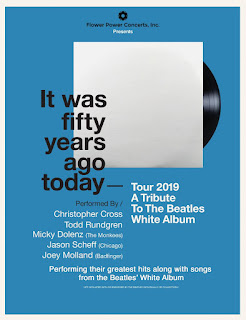 In celebration of The Beatles 50th Anniversary of the White Album, Flower Power Concerts, Inc presents It Was Fifty Years Ago Today - Tour 2019 - A Tribute To The Beatles' White Album feat. Christopher Cross, Todd Rundgren, Micky Dolenz (The Monkees), Jason Scheff (Chicago) and Joey Molland (Badfinger)! Musical Director: Joey Curatolo (the musical director of RAIN: A Tribute to The Beatles).

Performing their greatest hits along with songs from The Beatles White Album!

Christopher Cross is an American singer-songwriter from San Antonio, Texas. Cross won five Grammy Awards for his eponymous debut album released in 1979. The singles  “Sailing” (1980), and “Arthur's Theme (Best That You Can Do)” (from the 1981 film Arthur) peaked at number one on the U.S. Billboard Hot 100. “Sailing” earned three Grammys in 1981, while “Arthur's Theme” won the Oscar for Best Original Song in 1981 (with co-composers Burt Bacharach, Carole Bayer Sager, and Peter Allen).

Todd Rundgren, born and raised in Philadelphia, began playing guitar as a teenager, going on to found and front Nazz, the quintessential 1960's psychedelic group. In 1969, he left the band to pursue a solo career, recording his debut offering, Runt. But it was 1972's seminal Something/Anything?, on which he played all the instruments, sang all the vocal parts, and acted as his own producer, that catapulted Todd into the superstar limelight, prompting the press to unanimously dub him “Rock's New Wunderkind.” It was followed by such landmark LPs as A Wizard, A True Star and The Hermit of Mink Hollow, as well as such hit singles as “I Saw The Light, “Hello It's Me,” “Can We Still Be Friends,” and “Bang The Drum.”

Micky Dolenz is an actor, singer, director, producer, writer, radio DJ, inventor, and all-around performer extraordinaire, and stands tall as a paragon of taste and accomplishment in the rough-and-tumble world of show business and entertainment. Micky is best known as a vocalist and drummer of the 1960s pop legends The Monkees. The Monkees not only achieved great success as a TV show, but also as viable recording artists; selling in excess of 65 million units, and achieving worldwide success. Their first four albums - The Monkees (1966); More of The Monkees (1967); Headquarters (1967); and Pisces, Aquarius, Capricorn, & Jones, Ltd. (1967) all reached the number-one position on the charts and launched three number-one singles: “Last Train to Clarksville,”  “I'm a Believer” (both with lead vocals by Micky), and “Daydream Believer.” The group's first five albums also went platinum.

Jason Scheff is the longtime tenor lead vocalist of the Rock and Roll Hall of Fame inducted supergroup Chicago. Scheff joined the group in 1985 replacing the iconic vocalist/bass player Peter Cetera going on to be one of the principal songwriters and main contributors throughout Chicago's career. Scheff's songwriting, vocals, and musicianship helped create the most successful recording era of Chicago, the 1980s and 1990s. Scheff is also the voice across 4 decades, 1980s, 1990s, 2000s, 2010s, performing all the classic Chicago hits in thousands of concerts, television appearances.

Joey Molland is an English composer and rock guitarist whose recording career spans five decades. He is best known as guitarist, singer and songwriter of classic rock legends Badfinger. Molland is the last surviving member from the band's classic line-up and is still playing concerts worldwide. He is currently recording a new solo album produced by Mark Hudson.
Posted by British Beatles Fan Club at 00:10 No comments: