I first met Gerry Marsden in 1982 at Woolworths in Croydon.

He was on tour and promoting a new 20th anniversary album of Gerry & The Pacemakers. I was going to see the show at Fairfield Halls, Croydon that night but was able to meet Gerry and get a copy of the new album that he kindly signed for me.

It was a massive thrill for me to meet one of my idols face to face. Gerry was charming. He had time for a few words before I took my signed album away and went home to get ready for the show that night.

I would meet him again many times after concerts. Those 60s tours he had been part of since the late 70s had become an annual event and Gerry was almost always on the bill. The bands would come into the foyer after the shows to meet the fans and Gerry would always have time for people.

Probably the best meeting I had was in 1993, when he was again in Croydon on tour and signing copies of his autobiography I’ll Never Walk Alone, written with Ray Coleman. Despite the long queue he had time for a little chat about those days in the 60s and of course football, before he dedicated and signed the book for me. 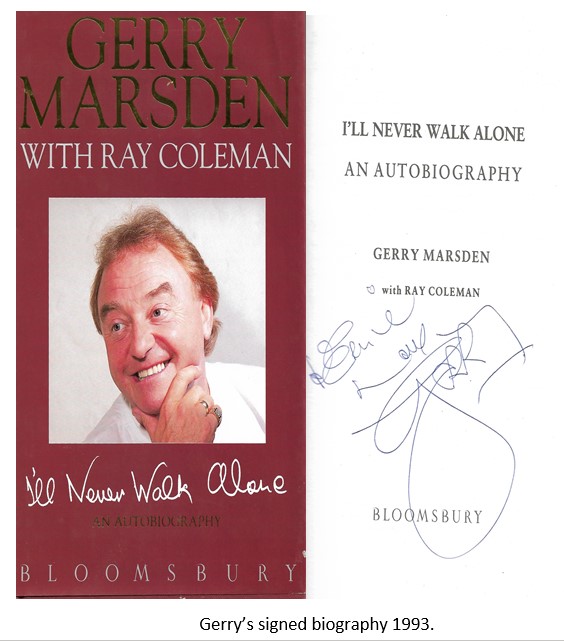 Gerry was born on 24 September 1942 in the Toxteth area of Liverpool where Ringo Starr also was born. He started to play guitar having got his first one aged twelve and saved money for strings by delivering the Liverpool Echo newspaper.

His first band was Gerry Marsden’s Skiffle Group, with elder brother Fred on drums. He was earning money during the day and playing at night. The band needed a new name and Gerry and the Mars Bars were formed. However, the chocolate company Mars told Gerry’s father that the name was their copyright, and so Gerry and The Pacemakers were born.

The Liverpool music scene was growing and soon Gerry and the band which now included bass player Les Chadwick, found themselves playing Liverpool clubs with some shows being promoted by Cavern host Bob Wooler. The group would soon be on the same bill as The Beatles at The Cavern. Gerry would also visit NEMS where Brian Epstein had a small record department. It was there he would meet John Lennon and Paul McCartney and they found they had similar music tastes. Rock ‘n’ Roll was now what all the bands in Liverpool wanted to play.

Soon Gerry and the band would be on their way to Hamburg. Playing eight hours a night made the group a much better unit. On their return from their first Hamburg gigs, Arthur McMahon left to get married and Les Maguire joined on piano. The Beatles and Gerry and The Pacemakers were great rivals to be the top band in Liverpool. This rivalry also made them great friends.

Whilst Gerry had started to write songs, Martin felt they needed a song from an established song writer. Mitch Murray had offered ‘How Do You Do It?’ to The Beatles, who famously did not give on of their better performances as they wanted their own compositions to be released.

John Lennon suggested to Gerry that they do ‘How Do You Do It?’. The song gave Gerry his first UK number one and ‘I Like It’ and ‘You’ll Never Walk Alone’, followed both reaching number one. As a result, Gerry and The Pacemakers became the first artist to have three consecutive number ones with their first three releases. This record would remain until the mid-1980s when Frankie Goes to Hollywood achieved the same feat.

Gerry and The Pacemakers and The Beatles often appeared on the same bill during those early 1963 tours. 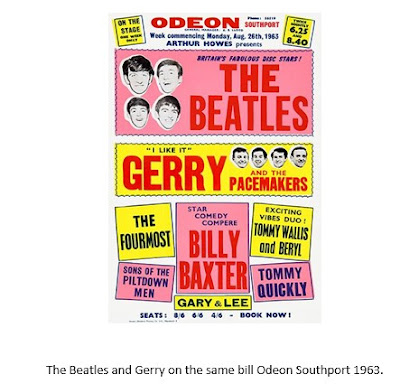 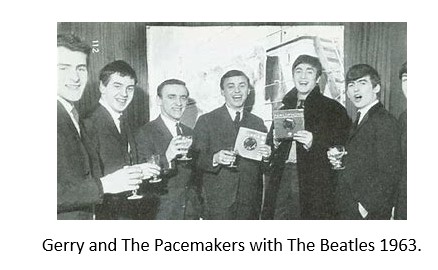 An album was rush released, called How Do You Like It? Released in October 1963, the album reached number two in the UK, only being kept off the top spot by With the Beatles. The album featured Gerry’s own composition ‘Don’t You Ever’. There were also cover versions of songs from The Beatles early repertoire like ‘A Shot of Rhythm and Blues’ and ‘Slow Down’. My own copy of this album is autographed by Gerry and George Martin. 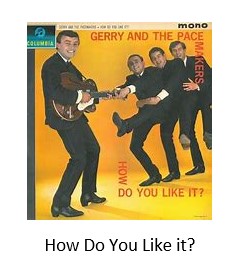 The hits continued for the next two years. Hit singles ‘I’m The One’ and ‘Don’t Let the Sun Catch You Crying’ were both written by Marsden. The latter was written after a row with his girlfriend Pauline. He wrote the song and sent it to her. They got back together and married. The story of that song was told many times later by Gerry during performances on Solid 60s shows and he always had a huge smile on his face when remembering. Pauline remained his wife for the rest of his life.

In 1965 the band filmed their first movie Ferry ‘Cross the Mersey’. The title song was again written by Gerry who was proving to be a more than average song writer. 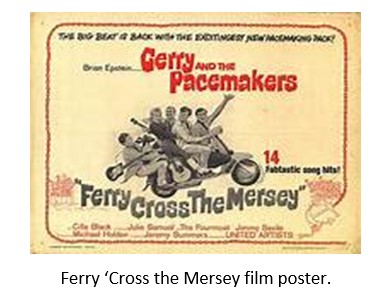 By the end of 1966 music was heading into a different direction. The Beatles were releasing Revolver. 1967 would see the Psychedelic Era in its prime and this was not The Pacemakers scene and as a result the group disbanded.

Following the death of Brian Epstein in 1967, Gerry’s career was aa crossroads and in 1969 he appeared in Charlie Girl in London’s West End following the departure of Joe Brown.

His first love was music and in the 1970s he decided to reform The Pacemakers, with a new group of musicians.

Interest in 60s music was still very much alive and in 1979 the Liverpool Explosion UK tour took place. This was the first time I would see Gerry live. The opening show was at The Rainbow Theatre, London on 29 April. This was the same venue where The Beatles had performed their Christmas Shows in the 60s. On the same bill were The Fourmost, The Merseybeats, Wayne Fontana, Billy J Kramer, Dave Berry, and Tommy Bruce.

The month-long Liverpool Explosion tour was a forerunner of the later Solid Silver 60s shows. 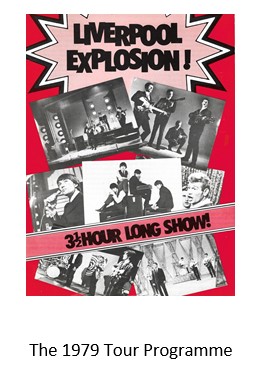 Throughout the 1980s and through to 2018 Gerry and The Pacemakers toured the world mostly as part of a Solid Silver 60s Show. I had the pleasure of watching them many times in Croydon and even once in Skegness at a 60s weekend. 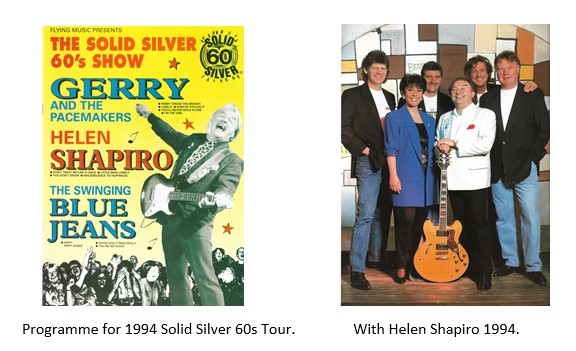 Gerry even found time to star in a musical called Ferry ‘Cross the Mersey. Gerry and his new Pacemakers continued to release CD albums, both live and in the studio. Several excellent compilations were also released in the 80s and 90s. One of the best was Gerry and The Pacemakers at Abbey Road, which features some previously unreleased material. Gerry and The Pacemakers The EP Collection featured tracks from EP’s issued in the 1960s. This CD included the four tracks on the EP Gerry in California released in 1965. This EP contains the only official live recordings of the original Pacemakers and shows they generated as much excitement with their live shows as The Beatles. 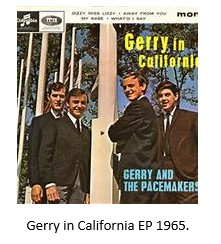 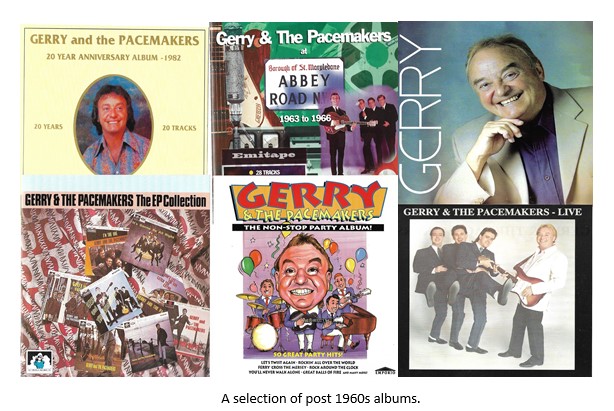 Of course, we cannot not mention Gerry’s amazing charity work for which he was awarded an MBE in 2003. He was also given the Freedom of Liverpool in 2009. 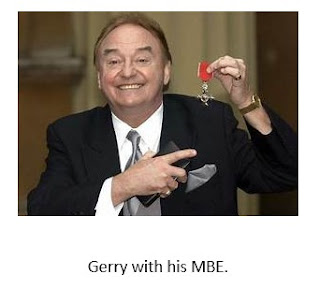 Gerry rerecorded ‘You’ll Never Walk Alone’ with a string of stars who called themselves The Crowd with all proceeds going to the Bradford Appeal. The Crowd included Denny Laine, John Conteh, Rick Wakeman, Zak Starkey, John Otway, Motorhead and many more. The record went to number one raising much needed funds for the appeal. 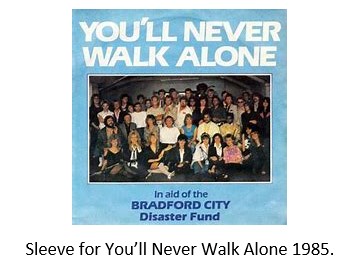 Four years later Gerry rerecorded ‘Ferry ‘Cross the Mersey’ to help the Hillsborough Appeal following the deaths of 95 Liverpool supporters at the FA Cup Semi Final against Nottingham Forest. (A 96th victim died in 2003). Enlisting the help of Paul McCartney, the Christians, and Holly Johnson the song went to number once again providing help for the families. That year saw an all-Merseyside FA Cup Final between Liverpool and Everton. Gerry led the community singing before the match singing ‘Abide with Me’ and ‘You’ll Never Walk Alone’. 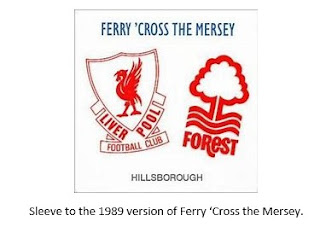 In 2020 Gerry rerecorded ‘You’ll Never Walk Alone’ to raise funds for the NHS during COVID19. Visit www.gerryandthepacemakers.co.uk to hear the song and see Gerry’s Christmas message. Gerry would occasionally appear on TV. Famously he appeared in an episode of the Liverpool soap Brookside in 1993 as the singer in a band that had original Beatle drummer Pete Best on drums. In 1995 he appeared on The Brian Conley Christmas Show.

In July 2017, an exhibition of over 30 photographs of Gerry and The Pacemakers were displayed at a special exhibition at The Museum of Liverpool. The exhibition was extremely popular and ran until January 2018.

Apart from music Gerry had a huge passion for Liverpool Football Club who adopted ‘You’ll Never Walk Alone’ as their own song.

The top 10 songs of the time were played at the ground in reverse order. The week the song was number one it was sung as the teams came onto the pitch. The Liverpool fans then kept the song and have sung it ever since. Gerry sang the song at Anfield, Liverpool’s home ground, at the 20th anniversary of the Hillsborough disaster. 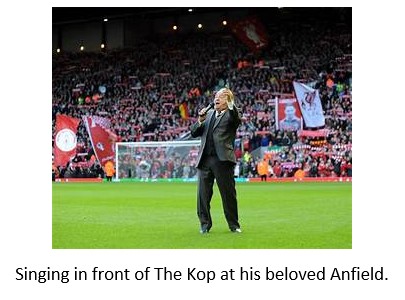 Gerry Marsden never lost his roots and passed away in the Wirral on 3 January 2021. Thank you for all the marvelous memories. You will never walk alone.

Our thoughts are with wife Pauline and daughters Yvette and Vicky at this time.

Email ThisBlogThis!Share to TwitterShare to FacebookShare to Pinterest
Labels: Tribute to Marsden