Be there and be part of Here There and Everywhere

Here is your opportunity to be part of an incredible documentary film!

A love letter to The Beatles from their fans. (Two hour documentary feature film)

This is an incredible opportunity for Beatles fans around the world.  Until now there have been many films about The Beatles, but this film is different.  It tells the story of the fans behind The Beatles.

Without their fans, The Beatles wouldn't have been the sensational phenomenon that they were.  The Beatles were the best band ever, but had the fans not reacted the way they did and continue to do half a century later they would have been just another band.

And Beatles fans are special.  The Beatles lasted less than a decade as a band, but half a century later, their fans live on creating friend networks around the world, attending festivals, tributes, and more.

Simon Weitzman's Here There and Everywhere Film is being made by fans for fans about the fans. Plus it is being funded by fans!

You can contribute any amount, even just a dollar/pound/euro to be able to say you were part of this project.

Of course like all crowdfunding, you can snag some nice perks if you give certain amounts.  For £30 for example, you can get your name in the credits and a numbered copy of the final film.

Want to know more? Watch the clip below.  Ready to get in on the action? Click here

Wondering who the team behind this project are?
Simon Weitzman is a network TV director who has also been involved in writing and producing books on The Beatles and their career. He has been working behind the camera on this project since 2017. Andy Lee is also a network TV director and editor with decades of experience and credits. David L Simon is the former head of Disney TV, Dreamworks TV and Fox Networks. Stuart Everett and Keith McCallum are accountants and fans. There has also been help and contributions from a world of fans.

Do you have a Beatles story to tell?
We are still all ears. If you have a story or talent to share simply contact the team at info@beatlesdoc.com

Posted by British Beatles Fan Club at 23:35 No comments:

Celebrating 30 years of Beat Archiv in Glauchau in October 2022! 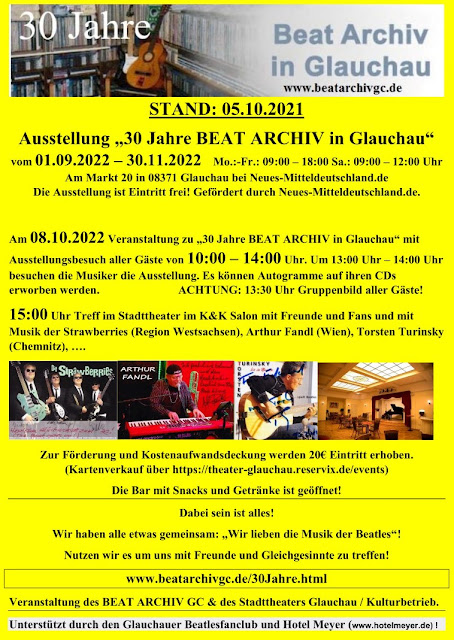 Posted by British Beatles Fan Club at 23:42 No comments: