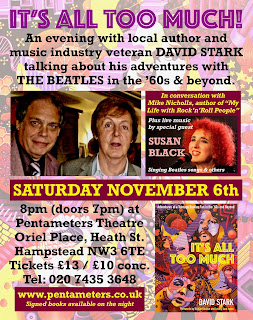 Beatles author and music industry veteran DAVID STARK will be talking about his recent book "It's All Too Much - Adventures of a Teenage Beatles Fan in the '60s and Beyond" with author Mike Nicholls with live music, including a few Beatles songs by acclaimed singer/songwriter Susan Black.

IT’S ALL TOO MUCH is the unique memoir by music industry veteran David Stark, who grew up in north London during the 1960s as a dedicated Beatles fan and was lucky enough to meet his musical heroes on various memorable occasions. From gate-crashing the Yellow Submarine film premiere in 1968 (aged just fifteen) and ending up sitting directly behind the group, to meeting all of them individually in some extraordinary circumstances, David has some highly entertaining stories about his many Beatles encounters which have never been told before.

The evening will include David recalling how he won free tickets the Beatles' live TV show in late 1968/early 1969 which never happened as they played on the rooftop of Apple instead. However as listings for Time Out magazine of November 1968 prove, the group had actually pencilled in 3 nights at The Roundhouse in Chalk Farm between Dec 14-21st 1968. As David says, "that would have been a quite incredible event to attend. Instead I ended up with a consolation prize of an advance copy of Abbey Road plus a letter of apology from Beatles & Co. signed by Peter Brown and Ringo."