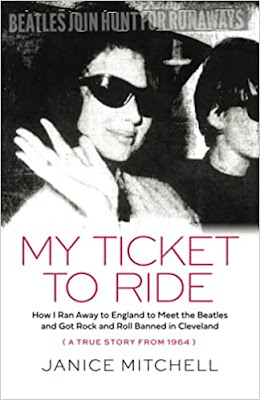 This autobiographical account of Janice’s real-life adventure in 1964 was a fantastic and fast read.  When the book was first offered to me to review, I wasn’t expecting much. So many fans have tales to tell about their adventures trying to meet The Beatles, but I was skeptical that any one person’s tale could fill a nearly 300 page book. I was proved wrong!

I was sucked into her story from the first page and couldn’t put it down. I finished it in a single weekend and promptly bought a copy as a Christmas gift for my best friend!

Part of the draw was that I saw similarities to Janice and her friend Marty. I wasn’t old enough to be a fan when The Beatles were still together, but that didn’t stop my best and me from doing some crazy exploits such as sending Paul birthday cards and delivering them through the letter box in the driveway gate at his London home. What Janice and Marty did went way beyond anything we ever thought of, and to be honest, I wish we had thought of some of the things they did such as finding a way to rent a flat in London and visiting the clubs in Soho where the Beatles were known to hang out.

I don’t want to spoil the story by giving away the best bits but suffice it to say while the two fans spent three weeks having fun, discovering fish and chips, Soho clubs, and learning to navigate on the Tube, they were blissfully unaware that every constable in London was searching for them. Even The Beatles were looking for them!

And when they are finally found it wasn’t the happy ending that everyone assumed. I can’t say more because it would ruin the book, but this is a great read for people who like the human-interest side of Beatles history. It isn’t for the fan who likes to swim in the depths of factoids about who played which instrument on which version on a particular date.  It gives a glimpse into what it was like to be a fan of the Beatles at the height of Beatlemania and because of all the international press at the time about the hunt for these two girls, there is lots of documentation to support the story