‘The Birth of The Beatles Story’ Book Launch 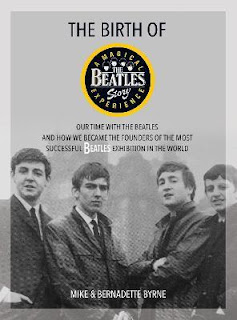 The original founders of The Beatles Story, Liverpool’s leading Beatles’ Museum, Mike and Bernadette Byrne, who opened the popular attraction 32 years ago on 1st May 1990, are launching a new book recounting the journey of the birth of the award-winning attraction and their personal relationship with The Beatles.

The authors of ‘The Birth of the Beatles Story’ are Bernadette Farrell, a Cavern regular who went on to date both George and Paul, and Mike Byrne, a fellow Merseybeat musician and acquaintance of The Beatles. This is the story of their amazing and uniquely personal journey. They not only witnessed music history being made but they went on to build The Beatles Story, which has become the most successful Beatles’ exhibition in the world.

They achieved this when tourism in Liverpool was very different to what it is today. The city was in decline and the local attitude to The Beatles was that they had abandoned their birthplace. Only a small minority of people believed in the potential of The Beatles as a tourist attraction.  With little experience, no money of their own, and hardly any support from the city, they succeeded in realising their dream.

Mike says: “It was great to be in a group in Liverpool at the same time as the Beatles and witness their phenomenal rise to fame, while playing the same clubs as them.  It was a time of hope and excitement! An unusual set of events in the 80s resulted in me managing Beatle City and taking it to America where my eyes were opened to the real potential of Beatles tourism.  Coming back to a city without its own permanent Beatles’ attraction made no sense. In the face of so much local apathy, we decided we would have to build it ourselves.”

The book, which will be launched to celebrate The Beatles Story’s 32nd anniversary on 1st May 2022, is littered with never-before-told stories giving a personal insight into the world of The Beatles before they became famous. Mike and Bernie tell the tale of their ambitious business dream that was inextricably linked to The Beatles, resulting in the opening of a unique attraction offering an alternative experience into the story of the world’s greatest band.

Featuring personal memories such as Bernie being caught with her hair in rollers by George Harrison, and Mike being backed by a 21-year-old Ringo while playing at Butlins Holiday Camp to escaping screaming fans in George Harrison's car and secret meetings with senior Beatles’ bosses in a London crypt, the book is packed with unseen pictures and untold stories and how a local couple helped Liverpool fall in love with the Beatles again.

Bernie says: “Having been a regular on the Merseybeat scene in my teenage years, and getting to know the Beatles quite well, I went on to become one of the first official Beatles guides in the 80s. This opened my eyes to the enduring popularity of The Beatles and eventually, in the early 90s, we felt compelled to fill the gap in Liverpool’s tourism offering by creating a permanent tribute for fans.”

The book will be released on May 1st, 2022, the 32nd Anniversary of the opening of The Beatles Story Experience in Liverpool. It’s a hard-back, coffee table book full of rare and magnificent images.

To celebrate the launch, The Beatles Story will host a free-to-attend event on May 1st, where visitors are invited to find out more about Mike and Bernie’s personal journey and to get involved in a Q&A session with copies of the book signed by the authors available to purchase.

Taking place in The Beatles Story’s atmospheric Fab4 Café at the Royal Albert Dock between 1pm to 3pm, the event will give visitors a rare insight into the history of the world’s largest permanent exhibition devoted to the lives and times of The Beatles. The session will be hosted by BBC 6 Music’s Matt Everitt followed by a Q&A and book signing with Mike and Bernie.

Places at the event are limited - to join this free-to-attend session, book online at beatlesstory.com.