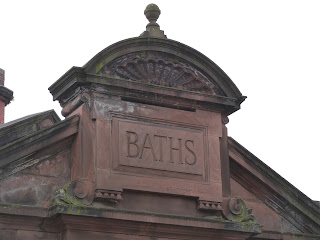 Woolton Baths was first opened in 1893, and was home to Woolton Swimming Club from 1895 until it was closed in 2010 by Liverpool City Council.  For over a hundred years, the pool was a vital and thriving part of Woolton village life and many children learned to swim there including future champions and future Beatles!  Both John and Paul used to go swimming at Woolton Baths, along with the Quarrymen and Paul's brother, Mike.  Indeed, according to the Quarrymen, Paul saved Mike from drowning on one occasion!

But now it's Woolton Baths that need saving. 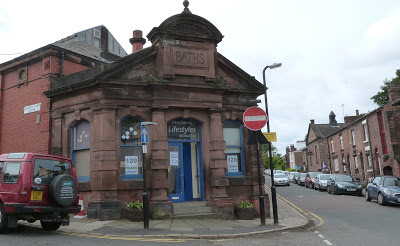 A very dedicated group of people are working tirelessly to ensure that, one day, the pool can re-open.  Although there is still a lot of work that needs to be done -- and money that needs to be raised -- the advances that have been made are very encouraging and solutions seem to be in hand for the various challenges that the group have faced and are still facing.

As part of the efforts to Save Woolton Swimming Pool, the building opens occasionally to raise both awareness of the fight to save the pool, and the funds necessary for the renovations and eventual re-opening. We were lucky enough to visit when the building was open on June 28 and 29 as part of the 120th birthday celebrations for the pool! 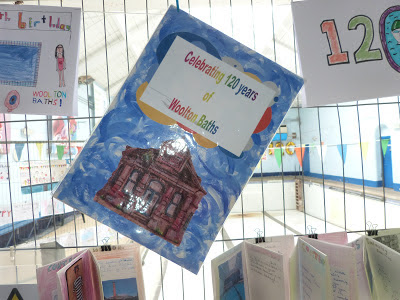 The pool may have been empty but the building was decorated with hundreds of birthday cards that had been sent to the pool to support the campaign and to celebrate its history!  The 120th Birthday Cake Decorating competition also produced imaginative and delicious entries. It is clear that the pool is loved, cherished and NEEDED.

Despite the pool's closure, Woolton Swimming Club is still active and meets at Austin Rawlinson Leisure Centre in Speke ... and continues to work tirelessly on efforts to re-open Woolton Baths so that the Club can return home. The club is run by a dedicated, very experienced and highly qualified group of volunteers. They give their time freely to keep the club running and teach both children and adults how to swim and then help them to progress to club level swimming and in some cases beyond.


The next chance to visit this historic and special site comes in September!  The building will opened again by Woolton Village Residents Association, supported by WSC,  during Heritage Open Days: Thursday 12th, Friday 13th and Saturday 14th September (and on the Saturday there will be other activities in the village as part of (Much)Woolton celebrating its centenary of becoming part of the City of Liverpool from the County of Lancashire on 9th November 1913).

The British Beatles Fan Club is proud to support the efforts to save Woolton Swimming Pool, and we hope that all Beatles fans share our feelings!

To find out more about Woolton Swimming Club, the campaign to save the pool, or to make a donation, visit the website at: http://www.wooltonswimming.btck.co.uk/