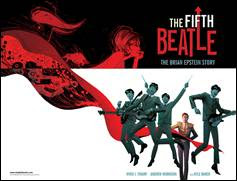 We are pleased to announce the release of the ALL NEW TRAILER for the graphic novel of THE FIFTH BEATLE! The Fifth Beatle follows the life of The Beatles’ manager Brian Epstein who was known to many as “The Fifth Beatle” due to his efforts in grooming the band’s persona. The graphic novel (which will be released on Nov. 19 by Dark Horse Comics) already has a film adaptation in development (with Beatles music rights secured).


The trailer will be screened as part of a continuously looping video throughout San Diego Comic-Con at the Dark Horse Comics booth. The novel's artist, Andrew Robinson, and writer/producer Vivek J. Tiwary will host a Fifth Beatle signing at the booth on Friday at 3 p.m.

About The Fifth Beatle:

THE FIFTH BEATLE is a graphic novel and feature film recounting the untold true story of Brian Epstein, the brilliant visionary who discovered the Beatles in a cellar in Liverpool, nurtured, protected, and guided them to international stardom, and died extremely successful and painfully lonely at the age of 32. It’s a human story about the struggle to overcome seemingly insurmountable odds—Brian was homosexual when it was a felony to be so, Jewish at a time of anti-Semitism, and from Liverpool when it was just a dingy port town. It’s a story about staggering ambition yielding staggering success, through a desire to change the world by messages of love and peace. A story about being an outsider and trying desperately to belong. A story about speed, triumph, and tragedy. A story whose themes resonate deeply across generations, sexes, and sexual preferences. A story full of dreams and music… The greatest music of all time.

The Fifth Beatle charts Brian Epstein’s discovery of The Beatles and his work to sharpen them into the stars they became—crafting their infectious image and presentation from truly rough and tough beginnings, securing a record deal when no one wanted to touch them, successfully bringing them to a world stage with a scale and scope no music impresario had ever attempted, and eventually proving through “Sergeant Pepper’s Lonely Hearts Club Band” that pop music could be an inspirational art form. Brian Epstein’s boast—“The Beatles will be bigger than Elvis!”— seemed absurd in 1961, but proved not just prophetic but humble by 1967.

Yet behind this “behind the music” story, The Fifth Beatle also follows Brian’s personal struggles and his desire to be “one of the boys”—a true “Fifth Beatle” if you will—in the face of crushing personal obstacles and loneliness from never having fallen in Love. His struggles with rapid, overwhelming success in the face of his simple human desire to belong. “The Fifth Beatle” will leave us passionately inspired but equally forced to question the last song on the last Beatles album when it suggests: “In the end, the love you take is equal to the love you make”.
Posted by Donna J at 16:08