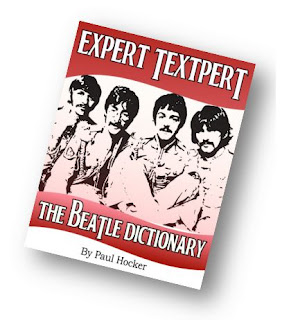 
The full story behind 76 words invented or customised by John, Paul, George and yes, Ringo.

Did  you  know  that Paul McCartney,  writer  of Blackbird and Bluebird, is  an avid  Ornithologist  or  that  Beatlemania  was  first  coined  by  a  Merseyside teddy  boy  during  a  court  hearing  in  the  early  1960s? Expert  Textpert also reveals  that  Lennon  was  caned  as  a  boy  with  an  umbrella  belonging  to  a relative  of  Eleanor  Rigby  and  that  She  Loves  You’s  ‘yeah,  yeah,  yeah’ morphed into a noun in France during the sixties to describe young people with long hair.

Expert  Textpert:  The  Beatles  Dictionary  is  a  unique  journey  into  the  rich history  of  the  planet’s  favourite  band that  avoids well trodden  chronology in favour of a magical lexical tour.

Expert  Textpert is available  on  Amazon with  over  160  copies  downloaded onto Kindles and iPads since it was published in May.


To see the book in store and reviews on Amazon click here: