Magnolia Pictures will release GOOD OL’ FREDA On Demand/iTunes and in theatres on September 6, 2013. 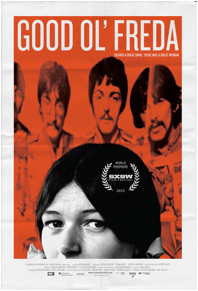 Freda Kelly was just a shy Liverpudlian teenager when she was asked to work for a local band hoping to make it big. Though she had no concept of how far they would go, Freda had faith in The Beatles from the beginning, and The Beatles had faith in her.

History notes that The Beatles were together for 10 years, but Freda worked for them for 11. Many people came in and out of the band's circle as they grew to international stardom, but Freda remained a staple because of her unfaltering loyalty and dedication. As the Beatles' devoted secretary and friend, Freda was there as history unfolded; she was witness to the evolution – advances and setbacks, breakthroughs and challenges – of the greatest band in history.

In GOOD OL’ FREDA, Freda tells her stories for the first time in 50 years. One of few films with the support of the living Beatles and featuring original Beatles music, the film offers an insider perspective on the beloved band that changed the music industry.

The film includes the following songs:
Arthur Alexander - Anna
The Beatles - I Saw Her Standing There
Ketty Lester - Love Letters
The Isley Brothers – Twist and Shout
The Beatles - Love Me Do
Fats Domino - I'm Ready
Buddy Holly - Words of Love
The Drifters - Some Kind of Wonderful
The Marvelettes - Please Mr. Postman
The Beatles - I Feel Fine
The Shirelles – Boys
The Cookies – Chains
Carl Perkins - Honey Don't
Little Richard - Long Tall Sally
The Beatles - I Will