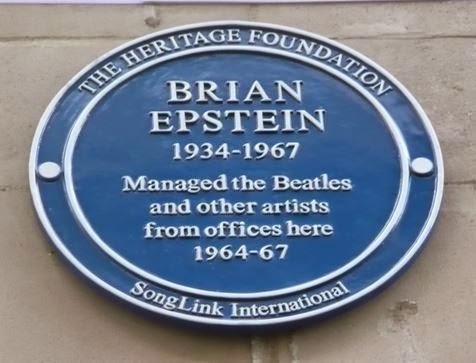 George and John have both honoured with a plaque at the old Apple offices in Baker Street and today Brian Epstein was honoured at Sutherland House Argyll Street, next door to the London Palladium.

Sutherland House was where Brian ran his NEMS operation from London, on the 5th Floor, when it was decided to move from Liverpool to London.

The Heritage Foundation President is Vicki Michelle MBE, known most famously as the waitress Yvette in the 1980’s TV show ‘Allo ‘Allo. Vicki opened proceedings and introduced other notable celebrities including Andrew Lancel (who plays Brian in the new west end stage show), and Martin Lewis, owner of the Brian Epstein website.

Others in attendance included Jeni Crowley (fan club secretary in London in the 1960’s), the legend that is Tony Bramwell, Tony Crane (lead singer of The Merseybeats), and Rod Davis (original Quarryman).

Dave Stark then told a brief resume of Brian’s life including a reading of a special message from Paul McCartney before 1980’s star Adam Ant told how his mum was once Paul’s housekeeper, and how he used to go to Paul’s house in the 60’s and got his first taste of screaming girls as he went in through the front gates.

The plaque was unveiled to rapturous applause and was all over in about 20 minutes, but was followed by a special luncheon.

At last Brian is getting the recognition he deserves. See photos from the event in the slideshow below.

The Heritage Foundation do some wonderful work visit them at www.theheritagefoundation.co.uk
Posted by Michele Copp at 18:55