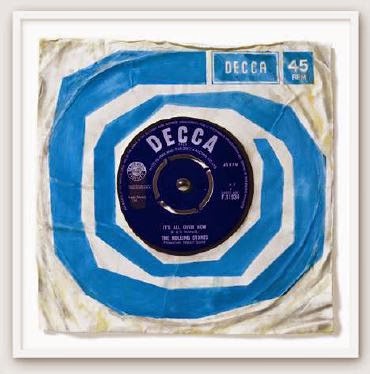 This summer Proud Galleries is pleased to introduce 45 Revolutions, an exhibition of supersized original paintings and prints of seven inch singles by artist Morgan Howell. This exhibition will celebrate the golden age of 'the 45' and will feature the most important and iconic single sleeves in 20th century culture.

This unique collection of painted singles is set to rekindle the long-standing love affair between music devotees and vinyl. The seven inch single revolutionised the music industry with its recognisable sound quality and thought-provoking artwork. Everyone shares a memory of the time they bought their first vinyl and the obsessive collecting that inevitably followed. In a digital age where the ease of MP3 has replaced the collectible aura of vinyl, Proud Galleries celebrate the format that gave birth to rock n' roll. Vinyl is the physical and emotional manifestation of our musical choices, defining part of our identities, and act as time capsules to special moments in our past.

Artist Morgan Howell celebrates this nostalgic love affair through his supersized art works. His unique mixed-media paintings are approximately fifteen times the surface area of the classic seven-inch singles on which they are based and he unsparingly captures the essence of each sleeve, recreating every little detail down to the crinkles and creases on each record.

Staged at Proud Chelsea on London's historic King's Road, the very heart of the counterculture movement of Sixties London, the exhibition will delve into the bands that drew their musical inspiration from their surroundings in Chelsea at that time. From The Beatles and The Rolling Stones to David Bowie and The Kinks, this exhibition reveals an insight into the singles that where produced during this period of creativity and freedom that has defined generations of music that followed.

Morgan Howell
A long-term member of the Royal Society of Art, Morgan Howell came up with the idea for creating these artworks in a moment of genius triggered by the call for entries to the RA Summer Exhibition. He rediscovered his formative years when music was everything and captured its’ essence in a series of ‘supersize’ singles. Each of his painted singles measures 27 x 27 inches, approximately fifteen times the surface area of the original singles on which they are based, unsparingly capturing the essence of each sleeve. Howell’s supersize paintings have achieved a cult following amongst music enthusiasts and his unique paintings of David Bowie’s “The Jean Genie” sits proudly on the wall at Sony Music. Further examples of his work are a permanent feature of the Radio 2 Green Room alongside Elton John’s piano, and when the BBC interviewed The Rolling Stones in London’s Dorchester Hotel in the run up to their concerts at the 02 in November 2012, three of his supersize Rolling Stones singles formed the backdrop. Vinyl is making a come-back and British artist Morgan Howell is at the centre of it.

Proud Galleries
Proud Galleries was launched in Autumn 1998. Its ethos? To bring the very best in high quality photography to the mainstream market. Proud instantly took the photography world by storm and quickly grew into Europe’s most popular private photography gallery. Today the Proud brand runs one of the most visited destinations in London. Three galleries, two live music venues and three Cabaret clubs across central London have cemented its success and in a harsh economic climate, Proud continues to expand. Never failing to exhibit the work of the world’s best photographers, Proud has hosted shows by everyone from Terry O’Neill to Jerry Schatzberg, Gered Mankowitz to Ken Russell. With star-studded launch parties and some of the best press coverage in the country, the unique Proud formula has situated the company at the very top of its game.