Beatlemania set to return to King's Heath on Sunday 15 February

Beatles Fest 2015 will commemorate anniversary of The Beatles' Birmingham debut

Beatlemania is set to return to King's Heath on Sunday 15 February as King's Heath commemorates the 52nd anniversary of the first ever Beatles gig in Birmingham at the old Ritz Ballroom on York Road which was sadly destroyed by fire in 2013.

From 3 p.m. to 6 p.m top local musicians will play their favourite Beatles songs in an acoustic session at Fletchers Bar on York Road directly opposite the former ballroom.

Doors will then open at 7 p.m at the Hare & Hounds for a Special Concert by top Midlands tribute band The Born Again Beatles who last year starred at Liverpool's Cavern Club where the Fab Four started out.

Bob Prew and Ken Whittaker, joint co-ordinators of the King's Heath Walk of Fame, said, “This year's Beatles Fest in King's Heath will be the biggest and best so far. We would urge fans to buy tickets for both events straightaway as last year's Anniversary event sold out very quickly with fans travelling from as far away as Lancashire, Yorkshire and Somerset”.

The Beatles appeared at the Ritz Ballroom – one of 4 venues run in the 1950′s and 60′s by the legendary Irish couple Ma and Pa Regan – on 15 February 1963 shortly after releasing their second single “Please Please Me”. Originally scheduled to appear on 11 January, they had been prevented by blizzard like conditions from making the 11 mile journey to King’s Heath from one of the Regans other venues – the Plaza in Old Hill.

When they did eventually make it on 15 February Beatlemania had really started to take off and the Beatles were only able to enter the Ritz by climbing up a ladder from Milford Place. In fact, the Fab Four almost had to appear as the Fab Three after George Harrison arrived late by taxi and was trapped by screaming fans.

“Tell them to turn that racket down” is what Pa Regan is rumoured to have shouted while they were practising! But he was a very happy man really. He had persuaded their manager Brian Epstein to agree to them performing for their previously agreed fee even though they were now No. 1 in the charts! They performed the rescheduled gig at The Ritz during a break from The Helen Shapiro Tour on which they started off as only 4th out of the 11 acts on the bill!

Below: The Born Again Beatles are all very experienced musicians having acted as support to Blur, Midge Ure and Wet,Wet,Wet. They regularly perform at clubs and theatres throughout the country and are shown here appearing at Liverpool's Cavern Club last year. 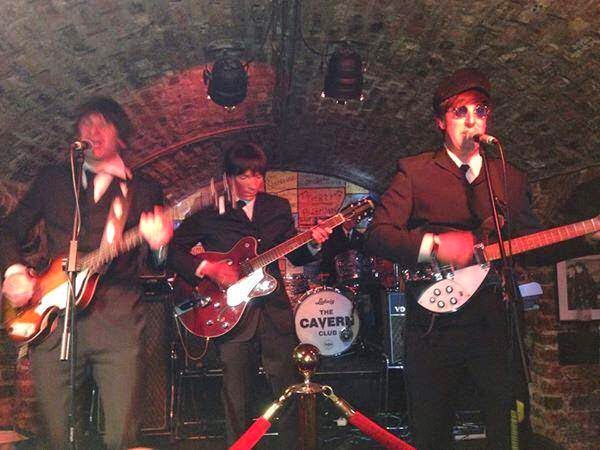