Retrospectacular June 20 - Your chance to sing like the Beatles! 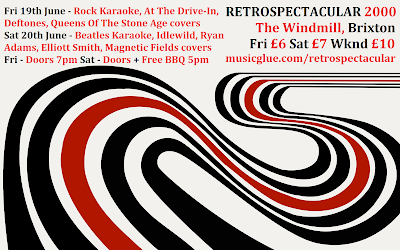 On Saturday June 20th at The Windmill, Brixton, as part of the popular "Retrospectacular" series of shows, YOU can come sing a Beatles song with a live band.  The year in focus is the year 2000, which may seem incongruous to The Beatles, but as you may remember, the "Beatles 1" album, compiling all of the band's number one hits, was one of the biggest selling albums of the year, and Retrospectacular curator Dan, who for five years fronted the band 4 or 5 Magicians (named after a line from the Magical Mystery Tour film) needed no excuse to finally perform a Beatles set at one of his shows, 50 years on from the year of release of the seminal albums Help! and Rubber Soul.You can choose from a list of 20 songs and sing your chosen song live with the band on stage.  To sign up to sing, and for more information, please email joinmyfreakinband@hotmail.co.uk Tickets are just £7 and include a free BBQ meal, with veggie and non-veggie options available.  Visit musicglue.com/retrospectacular to purchase an advance ticket, or simply buy on the door!  The full list of available songs (and information of other acts performing on the Friday and Saturday) can be found at facebook.com/events/799319646814279
Posted by Michele Copp at 23:18