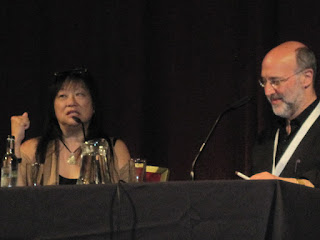 In 1969 May Pang was working for Alan Klein of ABKCO. She was a gofer. Because of Alan’s involvement with Apple, May was able to meet the Beatles. The first Beatle she met was Ringo Starr who was her favourite.

In December 1970 John and Yoko Lennon were filming ‘Up Your Legs’ and ‘Fly’ and they needed some assistance. They approached Klein who then asked if May wanted to help them out – yes!

May would stay with them in Tittenhurst where she was involved in the making of the film ‘Imagine’. She stressed that the scene in which John is playing ‘Imagine’ on the white piano in the white room with Yoko slowing opening the windows was shot MANY times. At one point John asked her how she liked Tittenhurst. May really didn’t know how to answer the question so John told her: ‘Well, it is 80 acres, you know.’ May also recalls the photo shoot in which John is parodying Paul holding a ram on his ‘Ram’ album. It was very difficult for John to hold on to the pig.

May moved to New York City in 1971 with them and recalled that John became particularly fond of Burger King and milkshakes. Initially they stayed at the St Regis Hotel in Midtown Manhattan on the east side. This is where they filmed the video for ‘Happy Christmas’. The images on the record label in which John’s face morphs into that of Yoko’s were hand done by the photographer Ian Macmillan who had previously shot the Abbey Road album cover.

George Harrison visited them in the St Regis Hotel. Jack Lemmon was a resident and often his calls would be accidentally put through to the Lennon’s room because of the similarity in the names.

John and George were getting along fine in the first few years of the 1970s but there was a confrontation between the two in 1974 when George was in the United States on his Dark Horse tour. The two met and George demanded that John take off his tinted spectacles so he could see his eyes. George told John: ‘You weren’t there for me’ and John replied: ‘I couldn’t but I am here now.’ May is not sure exactly what they were referring to – they could have been referring to their time in the Beatles or to more recent concerns such as Alan Klein and the dissolution of the band. It was around this time that George once turned to May and said: ‘I’m pleased you are with him.’

John and Ringo Starr were always close throughout the 1970s.

In 1973 May Pang helped the Lennon's move into their new flat in the Dakota building, 1 West 72nd Street in New York City. At this time May was assisting Yoko on the creation of Yoko’s album ‘Feeling the Space’. May contacted Jim Keltner to put a band together to record the album. Shortly after, John told May that he wanted to go back into the studio and asked her to arrange one in two weeks time – this would result in the album ‘Mind Games’.

At this time, May claimed that everyone could see that John and Yoko were drifting apart. Yoko came into May’s office at 9:30 one morning and announced that she and John were not getting along and were going to see other people. Yoko looked at May and said: ‘I know you don’t have a boyfriend.’ May was shocked and told her that she wasn’t interested, and she wasn’t at the time. Yoko insisted that she would be ‘good for John’ and left, later telling John that she had fixed things with May and he could go out with her. John approached May a few weeks later. John’s lawyer, Harold, was visiting from Los Angeles and John asked him when he was returning. On being told that he was leaving that night, John told May to pack his and her things and they left that night for a life together in LA. It was then that John went after May and she slowly fell in love with him.

Mark asked about this ‘long weekend’. May Pang replied that John really was not a drinker but that was the thing to do in Los Angeles. Harry Nillson certainly led him astray but their time there was not all about drinking.

May arranged for Julian to come out and visit. Cynthia accompanied him and when Julian saw John he ran into his arms. May still sees Julian once a year.

During the recording of Harry Nillson’s album ‘Pussy Cats’ Paul and Linda McCartney visited. This led to the ‘Toot and Snore’ bootleg recording – Mal Evans was on it, May played the tambourine and Paul was on the drums – John and Paul were having a fine time.

In December 1974 the Beatles were in the process of signing the final documents which would dissolve the group. John was holding back, stating that ‘the stars weren’t right’. George was in the United States on his Dark Horse tour and would ring John screaming at him over the phone. May heard George scream: ‘I started this tour without you and will finish without you.’ John finally signed the documents in their room when they were on holiday in Disney World in Florida.

May told us he exciting news that she still has the tapes of the ‘Too Many Cooks’ session John recorded with Mick Jagger. It was clear from her tone of voice that she had no intention of releasing it at this time.

May told the story of how John met David Bowie through the actress Elizabeth Taylor. It was at Dean Martin’s son’s, Ricky, birthday party in Los Angeles. They met again at Electric Lady Studio in New York as Bowie was recording ‘Across the Universe’. She also recounted the story of how John agreed to sing on his collaboration ‘Whatever Gets you Through the Night’ with Elton John if it made it to number one, never thinking it would! 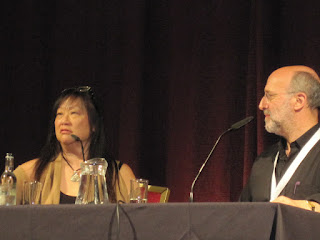 Mark Lewisohn asked May how she thought her relationship with John Lennon ended. May said that they were about to buy a house in the Hamptons, in New York state. They had picked out a Scottish-style house. Yoko was always ringing John. On one occasion Yoko thought John sounded breathless on the phone from too much smoking. She said she had a remedy. John wanted to go and see Yoko about this remedy. He then told May that he was moving back in with Yoko purely to make his immigration process more possible and that they would still see each other. May says that they did continue to see each other. The last time they spoke was in May 1980 when John was in Cape Town in South Africa.

May told of how she was the inspiration for the song ‘Surprise Surprise’ on the ‘Walls and Bridges’ album and that it was her voice on the song ‘No 9 Dream’.

All throughout the interview, May Pang was lively, happy to chat but reticent about speaking on controversial subjects like her relationship with Yoko Ono.

~ Report by Terry Bloxham
Posted by Michele Copp at 22:45