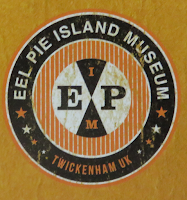 1960's music fans will be familiar with the name "Eel Pie Island." This Island in the Thames river in Twickenham, only accessible via footbridge or boat, was an unlikely candidate as a site that would change the face of music, but despite this isolation it became famous as a major music venue in the 1960s that launched many successful music careers. 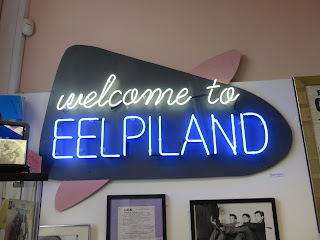 A group of fans representing the British Beatles fan club had an outing in the area last weekend, and we were delighted to discover that there is a wonderful museum in Twickenham dedicated to preserving and sharing the story of Eel Pie Island. 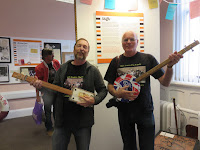 As soon as we heard about it, we made a beeline for the museum to check it out. We were not disappointed! The museum is exceptionally put together. The story of the island comes alive as you explore its history and learn how it played a part in the British Blues scene of the 1960's and of the early beginnings of stars such as The Rolling Stones, Rod Stewart and Eric Clapton. You'll be fascinated to learn how the island has also influenced other genres from jazz through heavy metal. The collection of photos, timelines and memorabilia is interesting and engaging and includes instruments you are not only allowed to touch, but can actually pick up and play. 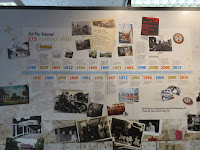 The curator, Michele Whitby, has created something really special. The museum is currently located on first floor of the Twickenham library on Garfield Road in Twickenham but they are actively seeking a permanent home. There is no fee, but a donation of £2.00 is appreciated to help the museum both continue and find its new home. Together a visit to the Eel Pie Island Museum coupled with a ride on the Swinging 60's Shuttle Bus (see review) makes a perfect day out for music fans.
Posted by Michele Copp at 19:32