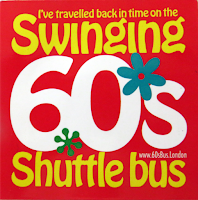 Rock and Roll fans pay attention: Next time you are in the London area, be sure to add an outing to Richmond to your itinerary.  Richmond and Twickenham  are well known as areas rich with Rock and Roll history that includes the Rolling Stones, The Yardbirds, The Kinks, Rod Stewart, Eric Clapton, Manfred Mann, The Who, David Bowie, The Animals, Joe Cocker, Elton John, Deep Purple, Pink Floyd, Genesis and many more. Even the Beatles, have some history here. However, the new Swinging Sixties Shuttle Bus makes learning and exploring this history easy, informative and most of all fun!

A group of fans representing the British Beatles Fan Club gave it a try last weekend and we were impressed. We opted for one round-trip ride on the bus that took us from the Waitrose bus stop in Richmond to Teddington and back. The original 1960’s double-decker bus is equipped with a music system playing music of the groups who got their start in the area, a fun and knowledgeable conductor (we had Paul) and a fab atmosphere. 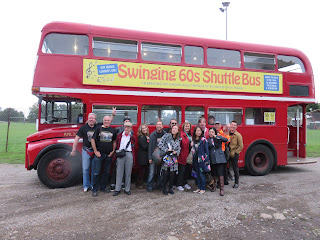 The round trip ride takes about an hour and during the ride, the conductor with immerse you into the 60’s music scene with stories about the legendary artists who got their feet on the path to stardom from local venues. There is no better way to take it all in and learn more about the unique breeding ground that launched so many music careers. 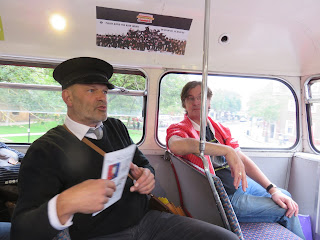 The shuttle bus is the first creation of the Music Heritage London (MHL) which plans to expand in future with more ways to share this rich Rock and Roll heritage area with fans. To learn more about the Swinging 60’s Shuttle Bus including updated prices and schedule, visit their website and like them on Facebook.

Paul our conductor also let us know about the Eel Pie Island Museum in town which we immediately added to our outing. Our next post will be a review of that fab museum.
Posted by British Beatles Fan Club at 13:58