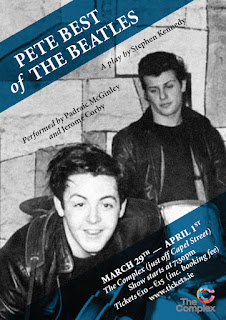 Stephen Kennedy's play PETE BEST OF THE BEATLES is returning to the stage in Dublin for four performances at the end of March. It will be on at The Complex (just off Capel Street) from March 29th until April 1st. The show starts each night at 7.30pm and ends at 10pm. Tickets cost €15 and are on sale at www.tickets.ie


This play had a very successful debut run at the New Theatre in Temple Bar, Dublin,in February 2016 – and Padraic McGinley is returning to play the part of Pete Best again for this short run. Padraic is superb in the lead role – and he will be joined in the play by Jerome Corby who will perform the part of ‘Voice’.

As you know, Pete was drummer with The Beatles for two years in the early 1960s. He played hundreds of shows with John Lennon, Paul McCartney and George Harrison – and then was mysteriously sacked a few short weeks before they released their debut single (‘Love Me Do’) and went on to take over the world. This play took Stephen over two years to research and write. It examines the mystery of Pete’s firing from the greatest rock ’n’ roll group of all time – and it presents a fascinating insight into the early days of The Beatles and their wild nights in Liverpool and Hamburg. As the logo for the show states… “If you think you know The Beatles – you’re wrong!” 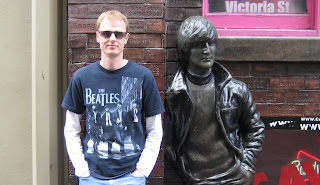 About the playwright – Stephen Kennedy has had his work broadcast on the BBC (John Lennon’s Last Day), RTE (Death and The Beatles Fan) and Radio Merseyside (Lennon v McCartney). He is also author of The Beatle Monologues which was on in Dublin last November. Stephen’s stage plays have been performed in Dublin, Belfast, Liverpool, Dundee, Berlin and Washington DC.  And he is also Director of the Dublin Beatles Festival.
Posted by British Beatles Fan Club at 23:27