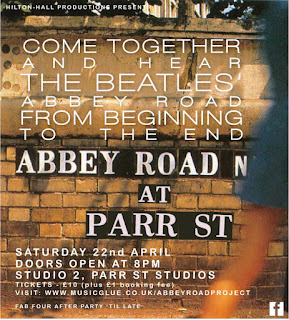 Famed for its iconic cover image and classic songs, the album 'Abbey Road' was never performed in concert by The Beatles themselves... On Saturday 22nd April, 2017, a seven-piece band of professional musicians will be recreating the sound and spirit of this incredible record, live on stage at Parr St. Studio 2 in Liverpool!

Hailed by many as a 'Masterpiece' and 'One of the Greatest Albums of All Time', 1969's 'Abbey Road' was the final album The Beatles recorded together before going their separate ways in the spring of 1970.

Encompassing a broad range of styles, as eclectic as the four individuals who composed and performed it, Abbey Road effortlessly blends genres such as blues rock and vaudeville pop, alongside progressive rock, elegant ballads, and of course the epic suite at the album's close, serving as one of Rock's greatest swan songs.

Join us for another walk down Abbey Road, lovingly recreated and performed in Liverpool, the birthplace of The Beatles. With a full evening of music, including support, and a Beatles-themed after party, this unique event is not to be missed.