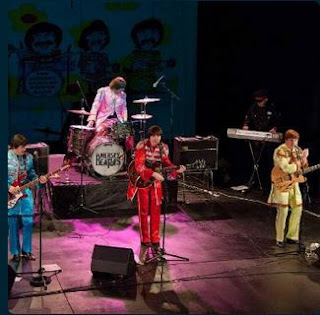 Unique Beatles Double Anniversary to be celebrated at Hare & Hounds on 4 June.

50 advance discount tickets at only £12.50 have just been released for a unique show by John Lennon's sister Julia Baird's favourite Beatles tribute band.

It will be 50 years ago in June 1963 that The Beatles released what is regarded by many to be the greatest album of all time - Sgt Pepper's Lonely Hearts Club Band. Now King's Heath Walk Of Fame are delighted to present The Mersey Beatles in a special intimate gig at the award winning Hare & Hounds on Sunday 4 June in a unique double celebration of the 50th Anniversary of the album's release and the 54th Anniversary of The Beatles third and final appearance in 1963 at the now sadly burnt down Ritz Ballroom next door to the Hare & Hounds on York Road, King's Heath, Birmingham.

Often described as 'the Best Beatles tribute band', The Mersey Beatles were all born and grew up in Liverpool. They were the resident band at the legendary Cavern Club for over 10 years and now regularly tour throughout Europe and the U.S.A.

Earlier this year they returned to perform their Sgt Pepper show at Liverpool's prestigious Epstein Theatre. John Lennon's sister Julia Baird comparing them to other Beatles tribute bands said 'The Mersey Beatles are the most authentic I've heard ... and I've heard them all'.

Joe Flannery, Brian Epstein's assistant, said 'When I saw them in The Cavern they perfectly recreated the atmosphere that the original Beatles produced. It was like listening to The Beatles again'. A review of a previous show said 'The quality of the music was superb with each song reproduced in the original key with spot-on harmonies and perfect guitar solos that had the audience marvelling at the sheer quality of the talent on view'.

In the first half of the concert The Mersey Beatles will perform Sgt Pepper in it's entirety and in the second half 20 of The Beatles greatest hits. Support to be announced. Doors open 7 pm

The Hare and Hounds is a standing and dancing only venue.
Posted by British Beatles Fan Club at 22:11