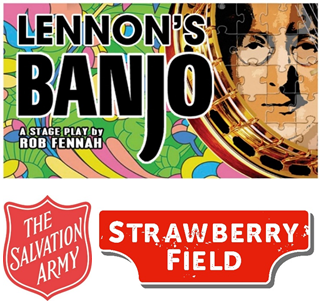 LENNON’S BANJO CHARITY PARTNER
ANNOUNCED AS SALVATION ARMY
IN LEGACY TO BEATLE’S CHILDHOOD
Redevelopment of Strawberry Field, inspiration behind the iconic Beatles’ hit, will benefit from donations
The Salvation Army’s Strawberry Field project has been announced as the official charity partner for the highly anticipated new stage show Lennon’s Banjo, which makes its world premiere in Liverpool this April.
Produced by Pulse Records Ltd in association with Bill Elms, Lennon’s Banjo opens at the city’s Epstein Theatre on Tuesday 24 April, continuing through until Saturday 5 May. Tickets are on sale now.
The Beatles’ original drummer Pete Best, will play himself in three special performances.
Throughout the show’s two-week run, there will be a collection at the end of each performance with all monies being donated to The Salvation Army’s Strawberry Field project.
Demolition work has already started to redevelop Strawberry Field, with the final vision resulting in a training hub for young people with learning disabilities, alongside a visitor centre, cafe and public gardens.
Set in present day Liverpool, Lennon’s Banjo is based on the 2012 novel Julia’s Banjo written by Rob Fennah and Helen A Jones. A mix of fact and fiction, the production will be directed by Mark Heller.
The quest is on to find the holy grail of pop memorabilia – the missing banjo on which John Lennon was first taught to play music by his mother Julia Lennon, who first introduced the youngster to rock and roll.
Strawberry Field was A Salvation Army children’s home for the city’s vulnerable children, set in woodland and near to where John Lennon lived in Woolton. It also played a vital part in Lennon’s formative years – inspiring The Beatles’ 1967 smash hit single Strawberry Fields Forever.
Major Drew McCombe, Divisional Leader for The Salvation Army, North West, explained: “Everybody knows the song Strawberry Fields Forever – but few people know the story behind the song. John had a troubled childhood and for him, Strawberry Field was a place of peace, refuge and a quiet spot where he could climb trees and dream his dreams. He used to jump over the wall into the Strawberry Field grounds, where he would play with the children who lived there and listen to The Salvation Army band.
“Our public fundraising campaign has a target of £2million to ensure our vision becomes a reality. Strawberry Field has the potential to change the lives of young people with learning disabilities who find it difficult to find gainful employment. It is a social injustice that they do not have the opportunities that others have – and we want to change that.
“Our aim now is to weave together educational, cultural, heritage and spiritual exploration in one bold imaginative plan. Visitors will be able to go beyond the famous red gates for the very first time and enjoy the new authentic exhibition, have lunch in the restaurant and relax in the tranquil gardens. We are very grateful that we’ve been chosen as the official charity partner for Lennon’s Banjo, and we wish the show every success.”
Co-producer Bill Elms added: “We are delighted to be supporting the work of The Salvation Army and its inspiring Strawberry Field project. The play centres around John Lennon’s very first instrument, which played a vital role in shaping his musical talent. Equally, Strawberry Field played a huge role in developing John’s creativity and imagination, so we are thrilled that Lennon’s Banjo can give something back to something which meant so much to John.”
Lennon’s Banjo is written by Rob Fennah, who will also co-produce the show. No stranger to theatre, Fennah wrote the stage play adaptation of Helen Forrester’s Twopence to Cross the Mersey which has enjoyed success spanning 20 years.
An eight-strong cast features Eric Potts, Mark Moraghan, Jake Abraham, Lynn Francis, Danny O’Brien, Stephanie Dooley, Alan Stocks and Roy Carruthers.
The Beatles’ original drummer Pete Best will appear as himself in three performances. Pete will appear in the 2.30pm and 7.30pm shows on Wednesday 25 April, and the 7.30pm show on Saturday 5 May. Alan Stocks will portray Pete Best in all other performances during the two-week run.
Lennon’s Banjo’s are delighted to be working with its Fab Four Production Partners who are The Cavern Club Liverpool, The Beatles Story, Hard Days Night Hotel, and The Beatles Shop.
Watch the promo video here  https://youtu.be/ddpVnRStAmo
For more info visit www.lennonsbanjo.com
LISTING INFORMATION