Paul has been busy- Karaoke, new album, walking in the park 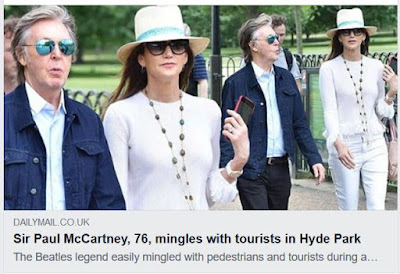 It has been a two weeks tracking Paul McCartney.  He's been in the news since June 9th with so many different things.

June 9: Paul toured Liverpool with James Corden surprising fans at every corner.  In town to film a Car Karaoke segment for CBS,  Paul even visited his old house on Forthlin Road, going inside for the first time in years.

Later that same day, he gave a concert to a lucky 50 people in the Philharmonic Pub debuting a song that he said would be on his new album.

June 10: Paul's Facebook and Twitter accounts started dropping visual hints about the new album with a series of images daily all week. 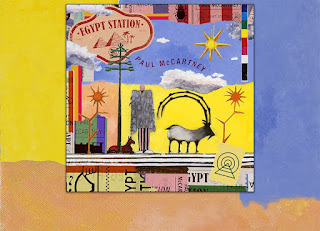 June 19: Paul officially announces that a double A side single from his new album would be released on June 20 with the full Album, titled Egypt Station, to be released in September in multiple formats.

June 20: As promised, the two singles were available on multiple outlets to download.  'I Don't Know' is a ballad and 'Come on to Me' is a more energetic tune with a catchy beat.  The full album will contain these two songs with 12 more.  The album artwork and the title are from a painting Paul did years ago called "Egypt Station."

June 20: Paul and his wife, Nancy, were spotted strolling through Hyde Park enjoying the weather and, no doubt, the buzz about his new songs.

On the same day, in an interview in Variety Magazine, Paul is quoted saying he will be doing some mini-gigs in July!  No hints were given as to where these gigs will be, so keep your eyes and ears open for news about these.  He also gave some insight into the remastered White Album that will come out with the 50th anniversary of its release.

June 21: This Thursday (technically early Friday morning) on The Late Late Show hosted by James Corden, the Car Karaoke segment filmed by Paul and James on June 9th will be aired.  Available in CBS, it won't be viewable by all countries, but as soon as a version shows up on YouTube we will provide the link.  Below is a teaser that hopefully everyone can see.

The BBFC have been notified that the second volume of George Martin's biography will be available soon.  We will review it as soon as our review copy arrives, but here are the details. We are also working to try to arrange an interview with the author.  Watch for details. Posted by British Beatles Fan Club at 15:03 No comments:

We have been working hard to make the magazine even better than in the past, and we've been receiving loads of positive feedback.

Please let us know if you like the changes, and if you have an idea for something you'd like to see us write about, let us know.  We have an exciting new series starting in our December issue.

Non members can order a copy from our website here.