THE BEATLES ERA- How I Decided to write a book 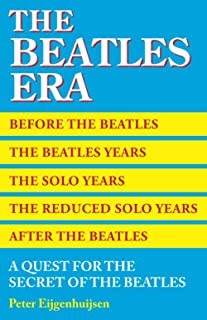 THE BEATLES ERA- How I Decided to write a book

I always have been interested in the phenomenon of the Beatles and their unprecedented fame. Everything they did is still being investigated and described in books.  Many people are remembered only because their path crossed the path of the Beatles. For example, David Mason, an excellent classical trumpet player, teacher at the Royal College of Music in London, member of the best orchestras, but he only achieved fame because of his piccolo trumpet solo in Penny Lane.

Another example of their off-the-scale fame is the Abbey Road crosswalk in London. The Beatles had some pictures taken there in 1969. And of course, one of these pictures was used for the cover of the last album they recorded. Since that time, the crossing has been repainted many times and it has even been moved, although the latter is contradicted by some. Still, it is now an official historic landmark and everyday people have their picture taken on that ‘same’ crosswalk. Why, as Ringo once put it, did this casual picture become the icon of life? What are these fans looking for? Do they just want to copy a famous LP cover for fun, or are they looking for a spark of the magic? Do they want to unravel or even become part of the mystery? These questions do interest me. And I like their music. There is nothing like it.

Not so long ago, I visited my friend Theo, a hard-core Beatles fan, who, in the 1960s, examined album covers and lyrics for clues. During that recent visit he introduced me to, what he referred to as, The Beatles Era. He explained to me, standing in front of his record collection, that people always associate the Beatles with the 1960s, but, he said, “their success and influence go far beyond that decade. They are still a mega selling band. They continue to be very influential in our time and are expected to be well beyond our time. Linking the Beatles with one decade does not do justice to their impact on other periods. When you really want to understand the phenomenon of the Beatles and their impact on our time and beyond, you cannot ignore The Beatles Era.” It was obvious that he was captivated by this idea.

“The Beatles Era consists of five periods,” he continued. “First you have the period Before the Beatles. This period, where the fruitful soil for the Beatles is laid, ends in 1957, when Paul joins the Quarry Men, the skiffle band led by John. Then, obviously, we come to The Beatles Years, when the Beatles become the epicenter of the music world. This is the most important period, both musically and historically. This period ends with the split-up of the Fab Four in 1970. In The Solo Years, John Lennon, Paul McCartney, George Harrison, and Ringo Starr spread in the four directions of the wind, each to find their individual style. With the premature death of John, in 1980, the period The Reduced Solo Years begins. This is the period in which we currently live. The Beatles Era will end - no it will continue - with the fifth period After the Beatles.” He paused a moment to increase the impact of the final chord of his speech. He looked at me, opened his hands in front of him and said, “We all live in The Beatles Era.”

He told me he came up with the idea of The Beatles Era when George died in 2001. He was on a business trip to the United States, when he saw a newspaper clipping on the wall, in one of the offices he visited, with just a picture of the cover of their second album With the Beatles with the left side made black. Only Paul and Ringo were looking at him, with serious faces, as if they were aware of their inevitable erasure. It was then, that he realized that we were entering a new phase, that nothing would be the same ever again.

Together we looked at the album cover of With the Beatles, which he took from his collection. It was scary, the black and white picture, with from left to right John, George, Paul, and Ringo. I covered the left side to get the effect of the newspaper picture. I could understand that it must have been powerful. “Of course,” my friend continued, “we do not know how the period The Reduced Solo Years will end, but the order of the individual Beatles on the album cover does not look insignificant to me.” “Everything on the cover of Beatles albums, has a meaning,” I said. “Intentionally or unintentionally.”

When I was cycling home, I smiled while thinking about my friend and his strange idea on The Beatles Era. At least he was never dull. But later that day, sitting on my couch reading a book, I stopped reading to rethink The Beatles Era. Maybe, it was not so strange after all. The Beatles had a major impact on society or were at least the symbol of the changes that took place. They personified the positive spirit of the 1960s and with their split-up in 1970, things became darker and more serious, as if we all had grown up and had to face reality. But there was always the possibility of them getting back together, a possibility that was cruelly destroyed by the murder of John Lennon in 1980. What also became evident throughout the years, was that the Beatles remained at the center of attention. Their music was reissued again and again, and new generations were introduced to it. Books on the Beatles continued to appear year after year. So, maybe the idea of The Beatles Era was not so strange after all.

As a fan, the theory appealed to me. But I was not the only fan. There were millions of fans and there were hundreds of millions who had experienced The Beatles Years, and for many people it was one of the most important periods of the 20th century, a turning point, after which nothing was the same again.

There was another reason why The Beatles Era appealed to me. I had the feeling it could help me to unravel the secret of the Beatles. I had always been intrigued by their fame, by the fact that so many books were written about them, going into the smallest details of their supremacy. It also amazed me that their music remained fresh, after all these years. What was the secret of their music? I was determined to get to the bottom of that. It was time to write a book about the Beatles. Yet another one.

My book The Beatles Era is available here on Amazon.