Book Review - Rivals Of The Beatles 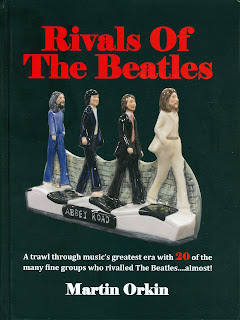 Rivals Of The Beatles

Only available direct from the author at https://rivalsofthebeatles.com/

With probably well over 2000 books published about The Beatles since 1962 (not even allowing for those published in other languages) do we need yet another book about them?  Maybe, maybe not.  But Rivals Of The Beatles is not the story of The Beatles as such.  It is the story of some of the other groups who were affected by them along the way.  All these acts in one way or another were influenced by, or owed a debt to, The Beatles.

Martin Orkin has always loved 1960s music and has a large record collection, accumulated since 1962 (when he was nearly a teenager!).  Following his retirement in 2010 from a small bank based in the City of London, Martin turned to his love of 1960s music.  A few years later, he came up with the idea of this book, and he has spent the last 4 years writing it.

Martin’s book (a weighty tome of 808 pages) tells the stories, one chapter each, of 20 of the groups who were around at the same time as The Beatles in the 1960s, some of them famous, some more obscure.  But additionally, and the ‘glue’ which holds the book together, is that he tries to relate each group’s story to that of The Beatles, and to show The Beatles’ big influences on others, and indeed the help they gave some of the acts.

He has attempted, through variety, to keep things interesting, so the deeply knowledgeable reader will still find something to challenge them beyond the more obvious names like The Rolling Stones, The Beach Boys and The Monkees. The Mothers Of Invention?  The Grass Roots?  He has endeavoured to make a case for each of them.  In his Preface, Martin tries to encapsulate some of the magic that the Fab Four shared with us all.

Rivals Of The Beatles was self-published on 15 April 2021, and is available initially as a hardback in a limited edition of 500 numbered and signed copies from Martin’s dedicated website www.rivalsofthebeatles.com.  This is the only place from which the book can be purchased.

There are some controversial views expressed in places in Rivals Of The Beatles, but throughout the book they are the author’s true opinions, based entirely on his love for the music and the era.

Peter is a contributor and moderator at www.45worlds.com as JPGR&B and is currently creating an online bibliography of The Beatles