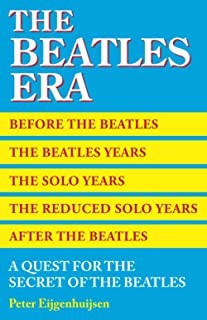 A Quest for the Secret of The Beatles

This enjoyable book is not long, just 104 pages, but I found it an interesting read. Really, it is a collection of five essays about the Beatles broken down by five eras defined by the author.

The first, “Before the Beatles”, explores the forces that came together to create the magic that produced The Beatles and their success. Some of this has been written about before, but I found Peter’s take on it a bit broader than usual incorporating facts about the vinyl record production process, for example, and its impact on their rise to fame.
The second section, “The Beatles Years”, focuses on more subtle impact The Beatles had on the world. As the author states, in the first paragraph, there are many other books that will tell you the facts and timelines about The Beatles from their time in Germany to their breakup. In this section he explores impacts of their fame on other artists, album cover imagery, religion and more.

The next two sections cover the solo careers of the Beatles broken into “The Solo Years” and “The Reduced Solo Years.” In these chapters the author attempts to determine if The Beatles maintained the same level of creativity as solo artists or was the magic of the foursome more than the sum of the parts. It also touches on the fact that despite the fact that they broke up years ago, the have somehow become bigger rather than fade away.

The final section is titled “After the Beatles”, and interestingly states that the “after” has not yet begun. Interest in The Beatles is still huge and with Paul and Ringo still producing great music 5o years later, they are still huge. He wonders will the after period happen gradually as the remaining two Beatles age or will it begin suddenly where there are no more Beatles left to make new music?

I’ve deliberately not given away too much since the book is not long. This is a wonderful book to sit down with on a rainy day that will get you asking yourself questions. It would be a great book for a book club discussion as it poses great questions for debate, rather than just detailing timelines and documenting facts that we’ve all read before.