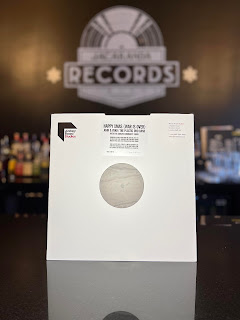 Jacaranda Records is offering a chance to get your hands on one of only 50 limited edition copies of Happy Xmas(War Is Over) - hand cut at Abbey Road Studios -  by entering a paid prize draw that could help find Liverpool’s next great music legend.

We have been gifted a rare and collectible limited edition vinyl acetate by Sean Ono Lennon and Yoko Ono  (machine signed by Yoko) to mark the 50th Anniversary of the song. As one of just 25 independent record stores to receive this amazing gesture we’re deeply honoured; so we’re going to use it to raise as much money as possible to support grass roots music in Liverpool.

Tickets for the prize draw will cost £10 each and are available worldwide. We will be drawing the winner at 1pm on Christmas Eve as an early Christmas present. We’ll also be spreading the Christmas cheer by giving a 10% discount voucher on their next purchase to everyone who enters.

What we have come up with should hopefully allow us to both raise enough money to record an album with 10 local bands that have never recorded before and offer an average member of the public a chance to win a very special limited edition and benefit a local charity from the sales of the record.

Early next year we’ll be starting the search for 10 of the best unrecorded bands in Liverpool to take into the studio for a charity compilation to be released on Jacaranda Records.

We will be selecting the artists from the massive range of acts that have played on our stage at The Jacaranda Club but have never had the chance to record before.

Graham Stanley, one of the team behind the label says: “The Jacaranda Club has its own history with the Beatles going back to the late 50’s, and its former owner Alan Williams took The Beatles on their first trip to Hamburg. We want to honour that tradition by giving a leg up to local bands who might struggle in the new modern music industry. We have a great opportunity to do this as never before thanks to this incredible gift from Sean and Yoko. We are extremely excited by what we can potentially achieve with this”

All the profits of the sale of the album will be donated to an as yet undecided charity, but it will be local and will be music related. If enough is raised we want to reinvest and help more bands record their own original material.

The Jacaranda Club, Jacaranda Records, Jacaranda Record Store and Phase One all have strong connections to Liverpool’s live scene, having hosted hundreds of local, national and international acts. The booking arm of our business Out Of Phase has brought some exciting acts to the city and allowed the music lovers of Liverpool a chance to see bands they might not otherwise see through their in-store record signings.

Our aim is to help change Liverpool’s standing in the industry and give the public a chance to interact with renowned acts on a much more intimate level.

Happy Xmas from everyone on The Jacaranda Records team.