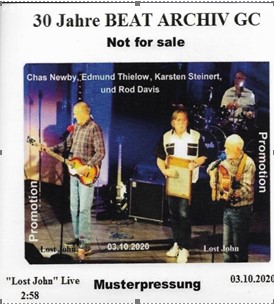 This single has been kindly sent to us by Beat Archiv, in Germany who are celebrating their thirtieth anniversary.

They have had a long association with artists connected to The Beatles, such as Klaus Voormann, Tony Sheridan, and The Quarrymen.

This one-sided single was recorded in Germany on 2 October 2020 and features Chas Newby on bass and Rod Davis on guitar. They are joined by Edmund Thielow and Karsten Stewart on washboard and drums to play ‘Lost John.’ The single was recorded live at Stadttheater, Glauchau, Germany.

The recording is excellent quality with Rod in excellent voice.

The song was recorded just six days before what would have been John Lennon’s 80th birthday and one I think John would have enjoyed very much.

The single itself is available as a limited edition of 250 copies and released on 10 January 2022.

Check out Beat Archiv at www.beatarchivgc.de