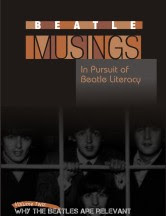 For more than 25 years, Joel Benjamin was a leading business and economics journalist.

Deciding he needed a new challenge- he retired and embarked on a two-year, investigative research project on the music and historical legacy of the Beatles.

Although he now calls himself a "music historian"- when he started researching the legacy of The Beatles Benjamin had never studied or written about music or played an instrument. He has no college degree nor any academic standing - in any subject.

He also had absolutely no hypothesis or outline of the research project he chose from himself- deciding instead to trust his investigative, researching instincts to take him to that part of their story that has yet to be told.

Benjamin says that what he has done that is unique is to look at the subject of the legacy of The Beatles with an entirely objective perspective- as if he came from another planet and asked people he met:
"Remember that rock group from the 60s- The Beatles. What was their story about? How come they were so good- and so successful in influencing and impacting the world?

He claims none of the official historical record of their phenomenon makes any logical or rational sense- both on the music side- but more importantly- of their influence on the world over the past 50 years. He wonders:
Considering where they came from- how could four young men of their background have conquered the world in such a short period of time?  Not as musicians- but as global cultural and social icons?

In a span of under two years Benjamin wrote twelve separate books on all 225 songs on their 12 studio albums. An additional three books are focused on the influence and impact The Beatles have had on the world in the past 50 years. Additional content on all 15 books can be viewed at the website of his Cypriot-based publisher- www.ArjonPublishing.com

There is currently about 25 universities in the US that offer courses on The Beatles- and one UK university that offers an actual MBA program. Beatle scholarship already exists. Benjamin says it needs a huge boast forward by global academics to put it on equal footing as any other academic subject universities spend public money to teach and investigate.

Benjamin's idea is for a few dedicated and capable academics to step forward and create an official "Beatle Studies Association" so that the nascent field of Beatle scholarship can become a  proper academic discipline.  He adds: " As I am not an academic it is up to someone out there that is- and believes in the need for the world to take Beatle scholarship more seriously."